Bloomers: The Downfall Of Womanhood and All Things Feminine


In 1851, Amelia Bloomer, newspaper owner and advocate of women’s rights, including suffrage, temperance, education, and fashion, introduced Bloomers to America.  Though she did not invent the outfit, Elizabeth Smith Miller did that, Amelia’s wide-spread promotion of them linked her name to the “short dress that reached to the knees with frilled Turkish-style trousers gathered in ruffles at the ankles.”  Women from Maine to California welcomed the comfortable clothing. 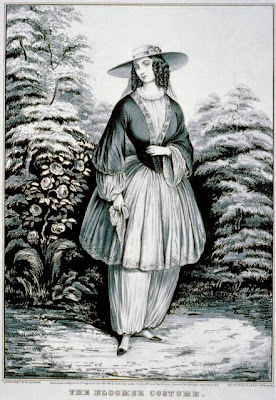 Men, however, often found the clothing a threat to “femininity, motherhood and family.”
Chris Enss relays in her book “How The West was Worn” a journal entry by Colorado miner Arlo Howell on May 29, 1853.  “It’s a disgrace to see females dressed in trousers—an offense to the very fabric of civilization. I was witness to a display of ‘bloomers’ the other day. The young woman’s skirt was unusually short. It was an outrage!”

Newspaper reported on sightings of women wearing the outfits. From the Daily Alta California in September 1853: “In yet another sighting, the city was taken quite by surprise yesterday afternoon by observing a woman in the company with her male companion, crossing the lower side of the Plaza, dressed in a style a little beyond the Bloomer.  She was magnificently arrayed in a black satin skirt, very short, with flowing red satin trousers, a splendid yellow crepe shawl and a silk turban a la Turque.  She really looked magnificent and was followed by a large retinue of men and boys, who approved to be highly pleased with the style.” 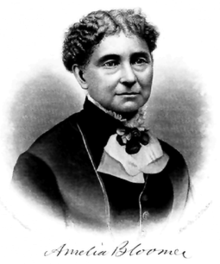 In response to the controversy she caused, Amelia once wrote, “I stood amazed at the furor I had unwittingly caused.” But people certainly were interested in the new fashion. She remembered: “As soon as it became known that I was wearing the new dress, letters came pouring in upon me by the hundreds from women all over the country making inquiries about the dress and asking for patterns – showing how ready and anxious women were to throw off the burden of long, heavy skirts.”
Bloomers fell out of favor for a while, but with the invention of the bicycle, they made a comeback.  Reports of bicycling accidents caused by long skirts getting caught in the gears appeared often in the newspapers. In 1880 “The Girl’s Own Paper” advised that there must be no long skirts worn when using the tricycle dress. Women turned to the Bloomer instead. 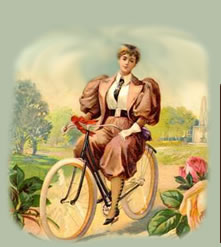 Over the years, the design changed some. The short dress was replaced by a blouse and jacket, as seen above.  But the split skirt/trousers were here to stay and by the turn of the century they were quite the mode of fashion.
Work Cited and Further reading:

http://www2.kenyon.edu/khistory/frontier/ameliabloomer.htm
http://www.fashion-era.com/rational_dress.htm
How The West was Worn: Bustles and Buckskins on the WildFrontier by Chris Enss