Dowsing, sometimes called divining, wishing, or witching has been around since the beginning of time. Evidence of its use has been found on every continent throughout civilization. They claim there is no scientific proof that it really works and many times it doesn’t. Some people can do it and some can’t. Some swear it’s the result of electromagnetic activity, others say that’s got nothing to do with it. It’s been used to find all sorts of things from water to graves to car keys or other lost objects.
Teams of geologists and dowsers have worked together to find water in the driest of places and 96% of the time the dowsers found water. It was exactly the number of feet down that they predicted. For every attempt to discredit dowsing, there’s another scientific study that says dowsing works, but they don’t know how or why. They just can’t prove it does or doesn’t. But it is known that almost everywhere on this planet you will find water under the ground. So the odds are with the dowsers.
Using a forked or "Y" shaped branch usually from a willow tree, a fruit tree, or shrub is all it takes. Even wire coat hangers have been used. I’ve seen people use what looks like two zip ties hooked together. 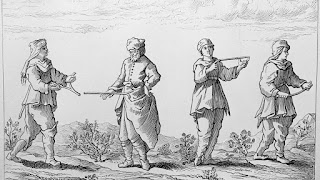 
If using a branch, there seems to be a fairly consistent suggestion to have the three parts of the rod about 12 inches or a 1/3 of a meter. The two branches (the “V” section of the "Y") are held loosely in palms-up hands, leaving the protruding end or the pointed baseof the “Y ”of the branch facing away from the body. Slender branches with no twiggy bits hanging off of it, apparently work best. Two rods or wires bent into an “L” shape also work. Hold the rods so that the shorter end is in each hand and the rods are free to move.
When the rod starts to move, you can count and when you reach the maximum movement, there should be water in that spot and the count should tell you how far down you will find water. No idea how fast to count or if counting tells you the depth in feet or yards. Dowsers are a little protective of their craft.
The next problem once you think you’ve found the right spot to drop a well is how to dig a well. Historically, they dug a hole with picks and shovels. It was dangerous especially as they dug deeper. Enter metal pipes. Many of our early settlers in the west were not hand digging their wells. Well digging equipment could be bought. Think of a screw point attached to a pipe and to that they would attach another pipe with holes in it. They would put a third pipe horizontally through the holes and use that pipe to turn the pipe with the screw point. Then they would just screw it into the ground. As the first section of pipe begins to vanish into the ground, a new pipe is added to the one being sunk, And the pipe with holes was placed on top of the new section. Drilling works better if you have two people to do it but the pipe could also be turned using animals. When drilling, they could go down 40 or 100 feet without hitting water or slam into rock and be forced to stop. It’s a frustrating job. (Even today with high-powered equipment that can cut through rock, it’s still not easy.) Then when they hit water it usually gushed out the top of the pipe, soaking the drillers. They had to get a cap on it. Most of the time, the cap was a hand pump that was attached. If they were lucky, they could buy a windmill. 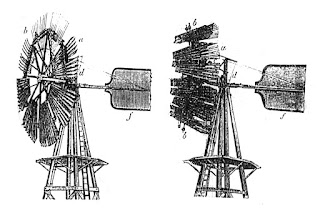 In 1850 Daniel Halladay and John Burnham started a company called U.S. Wind Engine Company. Their invention of the Halladay windmill changed everything. It was bought as a kit and assembled when it arrived. It was the means of moving water through pipes into the house and it could be used to turn equipment such as saws and mills. The first windmills were wooden and Daniel kept making improvements and eventually he was using galvanized steel. 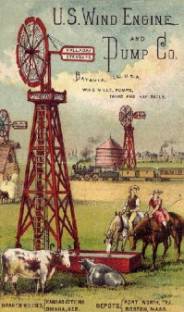 In my book, A Rancher’s Dream, I wrote about the men drilling a well. It was fun for me to write, but not fun for them. They worked hard and didn’t hit water after several tries. They enlisted the help of another man, an American Indian, who didn’t do any dowsing, but he merely looked at the way the land flowed and said try here. Okay, maybe that was a bit of a spoiler but not really. In A Rancher’s Woman, Mark got a used windmill. In a Rancher’s Request, they had real problems with their windmill when a storm took it down on a bitter cold night.
Even today some old windmills still dot the land, but new technology that allows for living off the grid, means windmills are sprouting across America especially in rural areas. Windmill farms are springing up and supplying electricity to residents in the area. Where my daughter lives, her local energy company is using windmills. Her water is from a community well. Something old is new again. 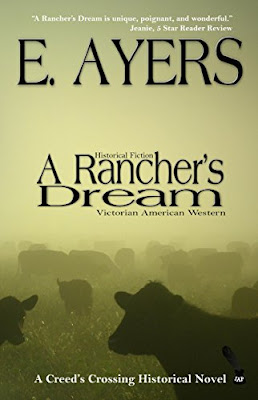 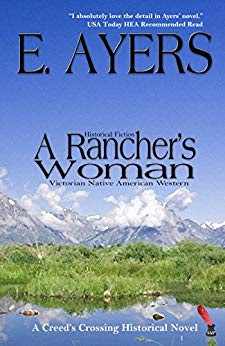 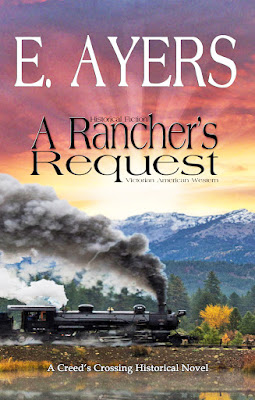