Since I saw the movie about Butch Cassidy and the Sundance Kid I’ve been fascinated by the Hole-in-the-Wall, Wyoming. Sadly, I’ve never been there. Hours spent reading about the area online and in books have only whetted my interest.

The Hole-in-the-Wall first became a hideout for criminals in the 1860s--decades before Butch and Sundance. The pass is in the Big Horn Mountains of Johnson County, Wyoming. At first, the hideout had only one cabin. The last one is now restored and protected in the Old Trail Town Museum in Cody, Wyoming.

After reading numerous accounts of the site, I’m summarizing my take-away-facts on the subject. The Hole-in-the-Wall started as a hideout in the 1860s and was used into the very early twentieth century. Wyoming winters are tough and robbers and rustlers needed a place to hole up for the winter. Eventually the one original cabin grew to six cabins.

Anyone operating out of there adhered to rules of the camp. These included ways of handling disputes with other gang members, and never stealing from another gang’s supplies. There was no leader per se, with each gang having its own chain of command.

Traveling 35 miles southwest from Kaycee, Wyoming, one passes through red sandstone to the top of the escarpment. The trail to the top is treacherous, made worse by the robbers scattering large stones on the trail. Once the top is reached, one can overlook a 360 degree view. Elevation ranges from 5,000 to over 8,000 feet. The red sandstone escarpment is known as the Red Wall.

Below is a large valley through which a stream flows. The grassland is broken by stands of ponderosa pine, Douglas fir, and limber pine forests.  The high red sandstone walls protect the valley in the winter, mediating the frigid weather. This made the valley an ideal place to bring rustled cattle. The valley was also a perfect spot for robbers and rustlers to spend the winter.

One of the first of “big name” criminals to visit was Jesse James. The numerous others include Black Jack Ketchum, the Logan brothers, Kid Curry, and Butch Cassidy and the Sundance Kid. At its height, it featured six cabins, a livery stable, a corral, and supplies with each gang contributing to the upkeep of the site. Although the name gives the impression this was one gang, actually several gangs operated separately most of the time. Sometimes one gang joined with another for a specific job.

In addition to the cabins there is a cave known as Outlaw Cave. This cave was said to also have been the hideout of criminals. I didn't find a reference listing the size of this cave's interior. The entrance is high enough for a horse to enter. 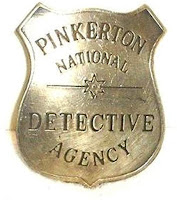 When I had to choose a spot for my Pinkerton couple to go in AN AGENT FOR LYDIA, I was quick to concoct a reason for them to visit the Hole-in-the-Wall. In fact, one Pinkerton agent really did visit there, Charles Siringo. 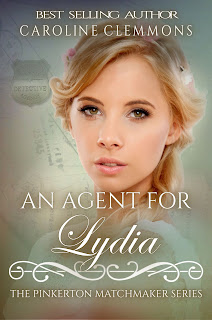 In AN AGENT FOR LYDIA, Pinkerton Matchmaker Series, Lydia and Jake Hunter pose as saloon singer Lily LaBelle and gambler Gentleman Jack Jackson. I enjoyed writing about adventurous characters who are forced to endure discomfort and danger—and who are in love. You know a romance will have a Happily-Ever-After. How the couple get there is the fun.

Here’s the blurb:
When Lydia Wood is left at the altar, she believes something beyond her groom’s control has happened. Two years with no word have hardened her heart. She has to get away from her parents’ constant urging her to wed an acceptable husband. Becoming a Pinkerton agent suits her plans.

Pinkerton Agent Jake Hunter has recovered from injuries that put him in a coma and a long convalescence. He realizes Lydia would have been injured had she been with him. To protect her, he vows to distance himself from the one person who means the world to him.

When they are paired for an investigation of robbers they must follow the trail to a dangerous hangout of men on the run. Can the two successfully pull off their charade and capture the robbers or will this trip confirm Jake’s worst fears?

If you’re intrigued, the Universal Buy Link for AN AGENT FOR LYDIA is http://mybook.to/Wood

I hope you’ll read my book and the rest of the series. Each book is stand alone. Mine is in KU, and available in e-book and print.

My earlier contribution to the series is AN AGENT FOR MAGDALA, which is set mostly in San Antonio, Texas. It was a fun book to write also. The books from this series involve couples working together in a paper marriage--even when they're not yet really together--and have a mystery and adventure as well as romance.

Labels: AN AGENT FOR LYDIA, Caroline Clemmons, Hole-In-The-Wall, Pinkerton Matchmaker Series, Sweethearts of the West
Email ThisBlogThis!Share to TwitterShare to FacebookShare to Pinterest