In book three of my series, Grace - Brides of New Hope, I knew I wanted Christmas to be a big part of the plot.
So, as I tumbled down the history rabbit hole, I came across German traditions in 1800s America...specifically, the German migration to Texas. As the granddaughter of immigrants, I often include ethnic characters in my plots, adding flavor to the melting pot that was, and still is, the United States. The more I read about the harrowing three-month ocean voyage from Germany to Galveston then traveling more than two hundred miles inland, the more the hero's-Tripp Walker-character and backstory emerged.
Christmas Trees
O Christmas Tree, O Christmas Tree,How steadfast are your branches!Your boughs are green in summer’s climeAnd through the snows of wintertime.O Christmas Tree, O Christmas Tree,How steadfast are your branches!
In the early 19th century, the German government wanted to preserve the forest so cutting down trees was against the law. But what they did have were goose and swan feathers. To get the green color, they boiled the tops of tansy and sorrel plants. Once the feathers were dyed, they were split and then secured with twine (then later, wire) to form the branches.  These twine branches were then wrapped around a sturdy twig which acted as the trunk. The branches were widely spaced to keep the candles from starting a fire and allowed ample space for ornamentation.

German immigrants brought feather trees with them when they sailed across the Atlantic to the New World. Their popularity was increased when President Theodore Roosevelt also responded to the diminishing supply of fresh evergreens in America. In an effort the save the trees, He ordered that no live trees be used in the White House holiday decorations.
Although the tradition of decorating churches and homes with evergreens at Christmas was already long established, it was the German-born Queen Charlotte, the consort of King George III, who was the first to have a Christmas tree in England, at a party she gave for children in 1800.
The custom did not at first spread much beyond the royal family, but Queen Victoria had a tree in her room at Kensington Palace every Christmas growing up — so she was happy to adopt her beloved husband’s custom wholeheartedly after their marriage.
When German-born Prince Albert married Queen Victoria, he brought his love of Christmas and Christmas trees to Windsor Castle. Decorated with roses made of colored paper, apples, wafers, tinsel, and special decorations made of pressed sugar, Albert and Victoria also lit their Christmas trees with the warm lights that flickered and gave a cozy glow to the entire room at that darkest time of year. Just one year after the royal marriage in 1840, the tradition of having Christmas trees had already become widespread, as wealthier middle-class families followed Court fashion.
Still, the connection to Germany led several American colonial towns where there were many German immigrants to claim the title of having the first Christmas tree in the country. Windsor Locks, Connecticut, maintains that a Hessian soldier put up a Christmas tree during the Revolutionary War in 1777 while he was imprisoned at a local home.
The title of having the first Christmas tree in America is also claimed by Easton, Pennsylvania, where German settlers were said to have erected a Christmas tree in 1816. In his diary, Matthew Zahm of Lancaster, Pennsylvania, recorded having a Christmas tree in 1821, leading Lancaster to also lay claim to be the home of the first Christmas tree in the US.
The Christmas tree came into its own in 1836.  The first mention of a Christmas tree was in a story, “New Year’s Day”, by Catherine Maria Sedgwick, in which she told the story of a German maid decorating her mistress’ tree.

But it was the prestige of the British royal family that secured the Christmas tree’s place forever in the hearts of Americans. The engraving of the family with their Christmas tree at Windsor Castle which had been initially published in The Illustrated London News in 1848 was copied in the United States at Christmastime 1850, in the popular magazine Godey’s Lady’s Book. 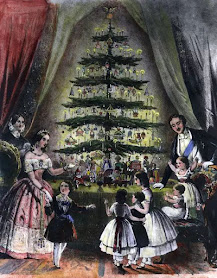 Immediately, the Christmas tree became an essential part of the celebration of the holiday in the United States, and ultimately, around the world. 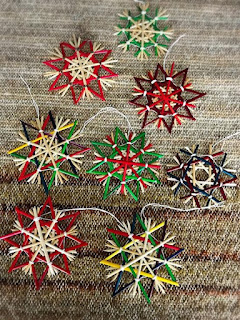 As with most of America’s Christmas traditions, much of the history of Christmas ornaments stems from Europe and more accurately from the holiday traditions of Germany.
German Straw Christmas ornaments have been used in Germany for centuries. They are fairly easy and inexpensive to make, and since most people had some access to straw, they became quite common. But it’s more than that… straw is closely tied to the symbolism of the Christ Child being born into a bed of straw. In fact, the legend of the first straw ornament is related to the Christmas Story.
The Froebel star carries the name of the German educator Friedrich Froebel, founder of the kindergarten concept. He encouraged the use of paper folding in early education with the aim of conveying simple mathematical concepts to children. Froebel did encourage paper folding as an activity for young children, which is how his name, and the folding instructions might have become synonymous. 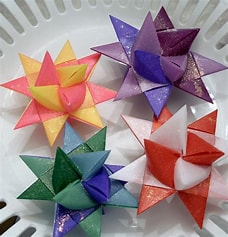 A side note here: When I was in elementary school, we had a winter play with the whole school participating. My mother, with the help of several mothers made hundreds of theses stars, dipped them in paraffin wax and sprinkled them with glitter. They hung from the ceiling of the stage during the Nativity scene. Admittedly, I do know how to make them, but haven't done so in years!
The Christmas Pickle

This tradition is commonly believed by Americans to come from Germany. It has been suggested that the origin of the Christmas pickle may have been developed for marketing purposes in the 1890s to coincide with the importation of glass Christmas tree decorations from Germany. Woolworths was the first company to import these types of decorations into the United States in 1890, and glass blown decorative vegetables were imported from France from 1892 to present day. 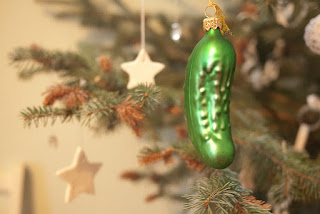 One suggested origin has been that the tradition came from Camp Sumter during the Civil War. The Bavarian-born Private John C. Lower had enlisted in the 103rd Pennsylvania Infantry but was captured in April 1864 and taken to the prison camp. As the story is told, on Christmas Eve he begged a guard for a pickle while starving. The guard provided the pickle, which Lower later credited for saving his life. After returning to his family, he began a tradition of hiding a pickle on their Christmas tree each year.

May Peace, Hope, and Love
be yours this
Holiday Season
and throughout the
New Year! 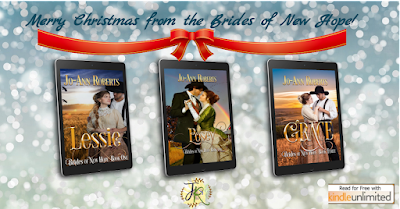 https://www.amazon.com/Marrying-Mended-Hearts-Jo-Ann-Roberts-ebook/dp/B09JFRKMHD
Posted by Jo-Ann Roberts at 12/16/2021