GAMBLING IN THE OLD WEST By Cheri Kay Clifton

After moving to Henderson, Nevada, it seems only natural that I write about the origin of gambling in the Old West.

Allow me to begin by saying that as a little girl, I loved to watch TV westerns with my dad. One of our favorites was a show called Maverick. The Maverick bothers, Bret (actor, James Garner who was my favorite) and Bart (actor, Jack Kelly) were cardsharps who played poker on Mississippi riverboats and throughout the American Old West. Getting in and out of life-threatening trouble, often with comedic effect, they always won out, good over evil. Granted the program was embellished with a lot of "Hollywood," but was based on the historical fact that in the mid 1800's on the frontier, the popularity of gambling flourished. 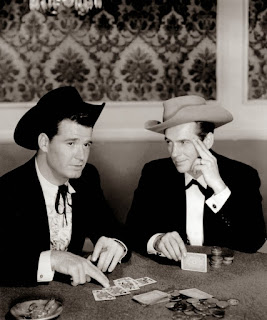 As towns spread through the West, along river crossings, near mining and logging sites, at railroad stops and outside Army forts, saloons, brothels and gambling halls sprang up for the mainly male population. Early camps with dirt-floor tents and bars made from boards balanced between two whiskey barrels grew into prosperous towns with wooden buildings with false fronts to make them look larger. 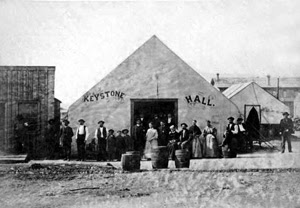 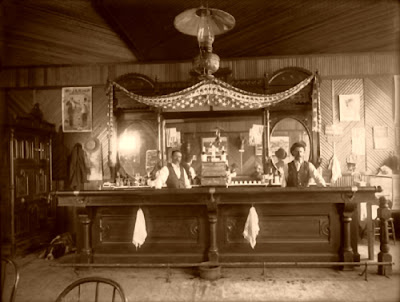 One of the most popular gambling games was poker. The exact origin of the game is unknown. Some historians believe that it came from a 16th century Persian card game called As Nas. Still others say it can't be pinpointed in time and believe the game evolved from many different countries. 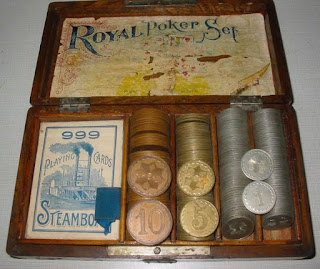 Another, vingt-et-un (twenty-one), was introduced in the predominately French community of New Orleans, a game now called blackjack. However, the most popular gambling game in the West was faro, its name supposedly derived from Egyptian pharaohs depicted on the back of French playing cards. 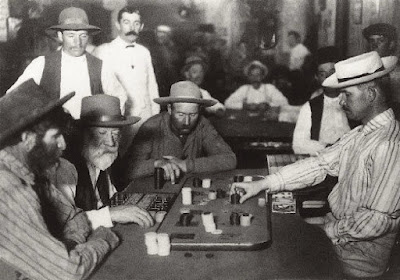 The historic California gold rush of 1849 brought many of the Mississippi gamblers to San Francisco where large gambling houses never closed their doors and enormous sums changed hands over the tables. Then in the 1860's came the great mining excitement of the Comstock Lode in Nevada. As in San Francisco, gambling houses dominated the main streets of the new towns, the most populated centering around Virginia City.

The construction of the transcontinental railroad across the continent produced a number of towns with flimsy erected gambling halls, saloons, dance halls and brothels that became known as "Hell on Wheels." Men working in the remote frontier, far from home, gave cardsharps (depending on the region, also known as card sharks) plenty of opportunity to separate such men from their wages. As the Union Pacific rail line continually moved westward to meet the Central Pacific in its historic linkup in Utah Territory on May 10, 1869, Hell on Wheels followed, reconstructing their shacks, whiskey barrels, gambling equipment and other belongings to the next location at the end of the line. A few of those communities remained; today's cities, North Platte, NE, Julesburg, CO and Cheyenne, WY can trace their origins to Hell on Wheels.

The decade of the 1870's brought more boomtowns along its mining communities, namely Deadwood in Dakota Territory, Tombstone in Arizona Territory and Leadville in Colorado. The famous Wild Bill Hickok was shot to death as he sat in a poker game in a Deadwood saloon, and the hand he held - aces and eights, became the legendary expression, ‘Dead Man's Hand.’

With the advent of trail drives of Texas Longhorns to the Kansas cow towns of Abilene, Wichita, and Dodge City, more gambling meccas were built and more legendary names made Western history. With backs to the wall and guns at their sides, lawmen, Wyatt Earp and Bat Masterson were well known for their gambling professions, as were Doc Holliday, Ben Thompson and Luke Short.

During the late 19th century many frontier towns and states enacted new laws against gambling, establishing limits and mainly targeting the professional gamblers. At first, the anti-gaming laws were weak and penalties were light. But with the rise of woman suffrage reform movements across the nation in the early 20th century and the prohibition of alcoholic beverages, the gambling laws were gradually strengthened. Ironically, Nevada was one of the first states in the West to make gambling illegal in 1909, other states soon following suit.

By the time construction on the Hoover Dam was underway in 1931, Nevada relaxed its gambling laws and casinos soon were back in business. By 1939, six casinos and sixteen saloons were flourishing in Las Vegas. As is often said, "the rest is history." Las Vegas became the gambling and entertaining mecca it is today.

Over the years, gambling has grown in popularity.  And you don't have to travel to Las Vegas to place a bet. Today many states have reintroduced gambling in limited formats and with carefully regulated laws. One doesn't even have to leave the comfort of the home, as anyone can log onto a computer to tempt the fates.

But the professional gamblers of the western frontier are long lost legends and only remembered in history books .... or seen on old TV western reruns .... or quite possibly read in books written by authors of Sweethearts of the West!

Born in Nebraska, Cheri Kay Clifton loved researching the Oregon Trail, historically known as the "Gateway to the West." Her passion for those brave pioneers, Native Americans and 19th Century America led her to write the epic western historical Wheels of Destiny Trilogy.  Cheri is married and has one grown son.  If she’s not riding on the back of her husband’s Harley, she’s writing the third book in the Wheels of Destiny Trilogy which includes published Book 1, Trail To Destiny and Award Winning Book 2, Destiny’s Journey.

"The Old West isn't just a time or place, it's a state of mind.  I get germs of ideas, do a lot of research, then breathe life into my characters.  I like strong heroines, but lovable; and strong heroes, but vulnerable."

Reviews from Easychair Bookshop judges:  "A must read western romance." "A10/10 read." "Action, adventure, romance at its very best."