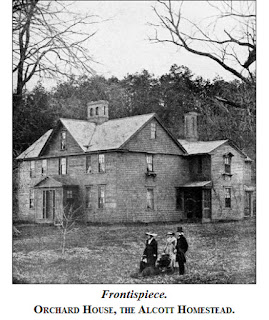 Louisa May Alcott’s prodigious output during the civil war is too often hidden by Little Women, which was published in 1868.  she’d begun writing as a child and was first published at the age of 8 (a poem, written under a pseudonym).  Her first story was published when she was fifteen, and she continued to write – to support her mother, father, sisters and relatives – for the rest of her life.

When she was finally accepted as a nurse during the civil war, her plans for an adventuresome setting she could reproduce in her writing was, instead, a sordid hotel that had been converted to a dirty hospital.

The nurses soon transformed the hotel into a sanitary hospital under the guidance of Florence Nightingale’s supporters. They learned about sanitation, hand-washing, bathing, and cleaning, which had too often been neglected.  The nurses had been chosen for their zeal for helping the sick and their not too attractive faces and figures.  ‘Spinsters’ were encouraged to apply and often chosen as nurses, but pretty young women were not. The reasoning was that the patients needed comfort and ease, not to be reminded of their infirmities and what was gone.

It was surprising to see a photo of Ms Alcott feeding a union soldier when she was dressed in a Victorian era dark blue dress. The philosophy behind the clothes and manners of the nurses was that the nurses should remind the soldiers of their sisters and mothers: caring, somewhat stern, and sympathetic.
The sympathy she must have shown to the soldiers shines through many stories, such as “My Red Cap.”  (the soldier in that story was familiar to readers of little women as Jo’s husband.)  Although Ms Alcott produced dozens of Civil War stories only a few collections are normally found, and the 1863 version of hospital sketches is read, online, in many places.
However, the autobiographical rendering of her leaving home to work as a nurse at what she called “hurly burly house” is not in that collection; nor is "My Red Cap" there.  https://www.youtube.com/watch?v=xwdx-_voteg is an audio edition performed for a book shop in Concord MA, her home town.  An audio collection and other stories are  available at  https://www.youtube.com/watch?v=xwdx-_voteg. Much of her writing is found at Project Gutenberg at no cost and at the Library of Congress online, which also offers her diaries, which stretch from 1843 to 1888.

Ms Alcott, as a sanitary project nurse, fed, bathed, dressed wounds, and listened to very ill soldiers. She was famous at her hospitals for the kindness and interest she showed each of her patients.  She was eager to write letters to families and loved ones – in the writer’s opinion, with more depth of feeling than more famous people who wrote letters for the soldiers. Many of these men were dying – and she was asked to inform them of their condition.  They were amputees whom the administrators felt would be troubled with bad health for the rest of their lives.  (There were very few hospices or facilities for sick and injured soldiers then.)

She didn’t hesitate to ask a patient about his deformity or sickness if she could help – and she very often did. She helped to found homes for elderly soldiers who’d otherwise be homeless.

Her sympathy for the maimed and dying man in “My Red Cap” is not marred by any mention of her own sickness and shortened life from mercury poisoning. This had occurred at the “hurly burly house” when she was treated for the typhoid she’d been infected with at that hospital.

Besides Ms Alcott’s literary works being hidden, her achievements have been forgotten even more.  The LOC pays tribute to her, though, as do many other libraries.  The ‘dime novels’ and stories that she wrote to pay the bills for them all are found in replica and  the Library of Congress is often a good source for finding them. The Saturday Evening Post printed many of her tales from the Civil War era.

Ms Alcott’s books and her intelligence were, in the writer’s opinion, often hidden from the world behind her father’s connection to a flamboyant version of transcendentalism (american romanticism, in literature).  Mr. Alcott’s adherents fasted to extremes, engaged in ‘inner looking’ until they were half-crazed.  However, the literature Mr. Alcott proposed for their reading was completely ordinary and scholarly.

Ms Alcott’s first description of Fruitlands, a utopian commune where they lived (and almost starved) was published in 1878 as the short story “Transcendental Wild Oats” (although much of her work appears in many forms). This is a satirical sketch of a family’s coming to Fruitlands, and their leaving seven months later.  The father in this story is seen, by many, as Ms Alcott’s father, Bronson. In Little Women, he appears as the father, a union chaplain who is no more visible when he returns from the war than when he left.

Writer Nathaniel Hawthorne, who was also a resident at Fruitlands, but a critical observer of the utopian communities in the second half of the 1800’s, published the Blithedale romance, with a similar beginning and ending.  In his novel, Mr. Hawthorne touched upon aspects of the post Civil War era that were not often mentioned, as did Ms Alcott in her many works.

“Louisa May Alcott, a notable woman of the Civil War” https://www.historynet.com/louisa-may-alcott

“Louisa on the Front Lines” https://www.kirkusreviews.com/book-reviews/samantha-seiple/louisa-on-the-front-lines/