I really enjoyed the research for my fourth book in The Surveyor’s Daughters Series, Winds of Change. The story, a romance set in 1903, concerns the first cross-country automobile trip across America and also about changes in the way rural people sent and received mail.

Free mail delivery in our country started in 1863, but only in the big cities. Farmers, ranchers, and country folk still had to travel into town to pick up their letters from a post office or pay a private carrier to deliver them. It took another thirty years for congress to pass the Rural Free Delivery Act (RFD) in 1893 and another three years before rural mail delivery really started. The RFD Act made it possible for country folk and farm families to have their mail delivered and picked up right where they lived. Packages and parcel post service didn’t start until 1913. 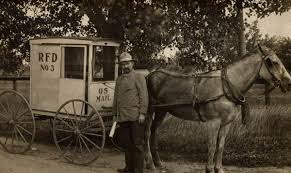 Not everyone wanted rural free delivery. Private carriers fought against the act. Merchants in general stores and mercantiles were afraid they’d lose business. Most of the rural post offices were located in these stores, and the merchants feared people wouldn’t make their weekly visits to town if they didn’t have to come in for the mail. Many people, including politicians fought against the RFD Act because they thought rural service would be too expensive.

This free postal service for rural folks started slowly back in the eastern states, but two years later postal officials announced that people in rural areas across the country could petition their congressmen for a free delivery route in their area. The post office was flooded with petitions. In 1902 there were less than 8,000 routes in the nation, but by 1905 there were over 32,000 routes.

The rural free delivery routes became the largest and most expensive endeavor ever for the United States postal service. The government financed the route drivers, but not the delivery wagons or horses to pull them. The carriers had to supply their own horse and wagon. There were soon ads in newspapers across the country advertising “the lightest post office on wheels, sensible vehicles for winter delivery, and off again, on again, gone again carts.”

Wagon makers were inundated with orders for delivery wagons and carts. The wagons were simple to ornate; some with wood paneling, built-in desks, and wooden mail slots for sorting the mail. Paper, envelopes, and stamps were stored in drawers and sold to patrons along the routes. The driver also needed a cash box or drawer for holding money collected for the supplies and for giving change when necessary. Many wagons had some form of heating equipment to keep the carrier warm.

All the wagons and carts used for delivering the mail were required to have the initials, RFD printed on both sides. One company made their RFD initials removable and advertised that their wagons could be used to deliver the mail during the week, and then the owner could take the RFD initials off on Sundays and use the wagon to take their sweetheart for a ride in the country.

In my book, Winds of Change, part of the story is about a family of wheelwrights who had made wagons and wheels for generations, and how the RFD Act bolstered their business. Almost at the same time, the advancement of the automobile came along and threatened their livelihoods. The first gasoline-powered vehicle delivered mail in 1906. And starting that same year, some carriers delivered and collected mail on Harley Davidson motorcycles.

When Cora Gardner reads about a wealthy doctor who’s attempting to drive an automobile from San Francisco to New York City via southern Idaho, she makes a fifty-cent bet that he’ll succeed. But there are only 150 miles of paved roads in the country, and none in Idaho, so her chances of winning are slim. Her enthusiasm for the cross-country road race excites all the young people in town who are fascinated with the idea of horseless carriages. All the young people, that is, except for that stubborn Gideon Lewis.Gideon Lewis learned to build wagons and wheels from his father, a master craftsman in his trade. He’s positive the automobile is simply a passing fancy for the wealthy, and that the doctor who’s attempting to drive across the country will bog down in Nevada’s sand like his predecessor. Gideon accepts Cora’s bet, however, and humors her in the attempt to win her hand.Will the biggest event of 1903 in southern Idaho enable Cora and Gideon to stop arguing about the future of the automobile? Is the beginning of a new era in America also the beginning of a new era for Cora and Gideon?Winds of Change is a fictional story based on an exciting true adventure. It’s a story of love and friendship and the ability to dream anew.
Posted by Caroline Clemmons at 1/02/2020