TEN MILES OF TRACK IN ONE DAY by Zina Abbott 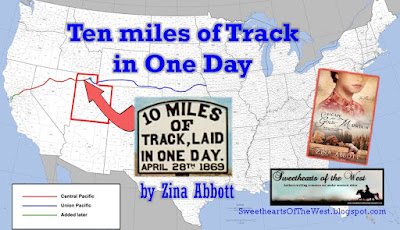 During six years, the builders of the Central Pacific, at times numbering 14,000 men, had pierced the snow covered, granite walls of the high Sierra and extended their trail of iron over the barren plains 675 miles eastward. For more than five years the Union Pacific had been building westward. Officers of both roads were fully aware of the future advantages that would accrue to the company having the longest mileage. This rivalry extended through the ranks—from the presidents to the track laborers. There followed some marvelous feats of track-laying.

The Irish tract layers average 2.3 miles a day. Considering they had the Sierra Nevada Mountains to cross, plus stretches of the Rocky Mountains, the average track laid per day by the Central Pacific was less. Once the men had everything they needed at their disposal, they could lay down track rather quickly. Engineers estimated that, if all conditions were perfect, it was possible to lay ten miles of track in one day.

Delays in obtaining and moving men, supplies and equipment forward caused the daily average to be far less. However, in an effort to prove who were the best rail builders, competitiveness drove the two railroads to contests in laying track. First, the Union Pacific broke the record with six miles of track in one day. When Charles Crocker and his crew made up primarily of Chinese workers were challenged to beat that, they did so by a mile. The competition escalated. Crocker bragged that his men could lay ten miles in one day. Vice President Durant of the Union Pacific took him up and wagered $10,000 it could not be done, and that his money was "covered."

For several days Crocker and his construction superintendent, J. H. Strobridge, marshaled their forces and laid their plans. Ties were hauled ahead by two horse teams and distributed along the right-of-way. For some distance the ties were spaced on the already graded road bed. Rails and track materials were moved up from the rear and held in trains ready to advance. More than four thousand men and hundreds of horses and wagons were on the spot. Every man knew his particular job, taught by many months of track work. No one would get in the other fellow's way. In the Central Pacific camp, the patient and methodical Chinese were stirred to a pitch of excitement never shown before, and shared with the few hundred whites the anxiety to "get at the job."

The original date set to meet that challenge was April 27th. However, a mishap with one of the engines delayed the event by one day. The Union Pacific scoffed, but starting at 7:00a.m. the morning of April 28th, the Central Pacific crew of eight Irishmen and hundreds of Chinese set about to prove their skill.

The following is from the book, Museum Memories, Volume 1:

By the time Promontory was selected as the meeting point, Central Pacific tracks had reached Monument Point, just north of the lake shore [Great Salt Lake]. Three sprawling grading camps with about 275 tents were located there. Although the Transcontinental line was not yet completed, increasing numbers of immigrants were moving westward by rail rather than by wagon train. They took the Union Pacific from Omaha to the terminus just beyond Corrine and hired stagecoaches from there to Monument Point. Then they boarded a Central Pacific train and arrived in California just a little more than a week after leaving Omaha.

Both railroads were benefiting from the increased ticket sales, but competition between the companies had become a habit, and officials pressed their contractors were more speed. A great rivalry as to which company could lay the most track in one day had commenced early in 1868. UP made six miles, and the CP laid seven mile soon afterward. The UP topped that feat with 8 and 1/2 miles. Charles Crocker then announced that the Central Pacific could lay ten miles in one day. Thomas Durant, vice president of the Union Pacific, wagered $10,000 that it could not be done.

Consequently on April 29 [sic], 1869, only fourteen miles from Promontory Summit, the work commenced. Several prominent men from the East and the West came to see the phenomena, and a committee from the Union Pacific arrived to document the progress. Crocker had planned the operation with exact precision. Ties have been placed on the roadbed the previous night, and five locomotives, each pulling 16 cars with enough supplies for two miles of track, were in position. A large diverse crew was on hand. There were Caucasians born in the United States, former slaves with African ancestry, European immigrants, Mexicans, French Indians, a few Native Americans, and more than 3,000 Chinese. 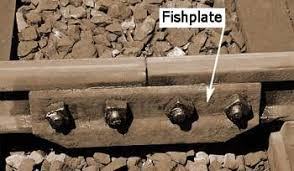 At the first light of dawn, the men were ready to go. The Chinese workers leaped onto the flat cars and began throwing down kegs of bolts and spikes, bundles of fishplates (metal plates used to join the rails), and the iron rails. The flat cars had rollers along their outer edges to make it easier to slide the rails off. As this operation was being mounted, three “pioneers” moved out along the grade, aligning the ties that had been placed the night before. Next, the foreman shouted “Down!” and a team of eight Irish workers (two at the front of each rail and two at the back on each side of the bed) grabbed the 560 pound rails with tongs and dropped them into position. Two men followed and aligned the rails with a portable track gauge to maintain the correct with. Chinese workers came right behind and placed spikes in the proper places atop the rails. Others carried the bolts and fishplates in buckets. Teams of ten (five for each rail) then drove the spikes. Each worker would drive his assigned spike and then walk forward to the same spot on the next rail without passing another man, allowing the worker to proceed at a walking pace.

The next team of “straighteners” repaired any defects. Then came one crew to ballast the rails and another crew of fillers. These were followed by a group of four hundred tampers. Empty cars were moved to sidings to make room for the ones next in line, and the entire process was repeated over and over. The string of 1,000 workers advanced at the rate of a mile an hour. Chinese with pails strung over their shoulders moved among the men with water and tea. The telegraph construction party kept pace with the railroad crews, digging holes, putting in the polls, and stringing the wire.
By the time the whistle announced the noon meal at 1:30 p.m., the workers had laid six miles of track. They named the site “Victory” (later Rozel, Utah) because they knew by then that they would be successful. The workers and several distinguished guests took an hour for lunch, and another hour was used to bend rails for the curves that lay ahead. Construction engineer J. H. Strobridge had a reserve crew standing by, but the first crew was intent on completing their unprecedented feat, and they forged ahead.

By 7:00 p.m. the Central Pacific was ten miles and fifty-six feet farther than it had been at dawn, an achievement that had never been done before and has never been matched since. The eight Irish track-layers had put down 3,520 rails. They had lifted 125 tons of iron rails plus the weight of the tongs, and amazing eleven tons per man per hour! The spikers drove 28,160 ties that have been put into place by the Chinese, and the bolt crews put 14,480 bolts into place. To demonstrate the quality of the new track, engineer Jim Campbell ran a train over it at forty-two miles per hour. Then the last of the five construction trains was backed down the long grade to the construction camp at Monument Point. Twelve hundred men piled onto the flatcars for the ride, smiling, cheering, and congratulating each other.

You can also read an excellent article about this event on the Central Pacific Railroad museum site by CLICKING HERE.

Did UP vice president Thomas Durant ever pay Charles Crocker of the Central Pacific the $10,000 that he lost on the bet? There is no evidence he ever did. 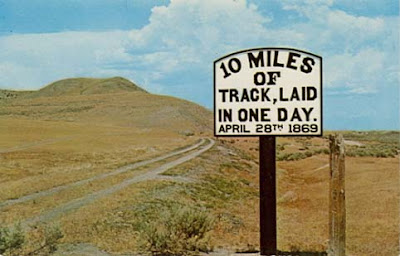 There is a replica of the sign that marks the end of the ten miles and fifty-six feet of track laid that day about two weeks before the Golden Spike ceremony that joined the two railroads. The original sign, most of the paint worn off, was donated to the Daughters of Utah Pioneers museum in Salt Lake City. In commemoration of the sesquicentennial of the completion of the first transcontinental railroad that took place in Utah, the museum has commemorative pins of the Ten Mile Day available in their book store and gift shop.

Escape from Gold Mountain is now offered digitally exclusively on Amazon and in the Kindle Unlimited program.  The book is also available in print format on both Amazon and Barnes & Noble. Here are the purchase links: