Riots and Revolutions by Cora Leland 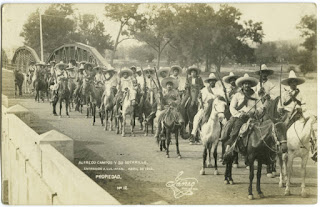 The Mexican-American War that ended in 1848 added 1 million square miles to US territory, enabling thousands to enter California and other parts of the west.

A different kind of revolution - the revolution of agriculture - also impacted westward growth.  Because of the grasshopper - sod-cutting plow - poor settlers and homesteaders were able to move West, knowing they'd be able to build their own home.  There were several ways a homestead of nearly free land could be acquired; most demanded that the head of the household live on the land.

Incidentally, Native Americans had homes dug out of the earth they called 'earth lodges.'  These Navajo people - the father a silversmith - are outdoors, with their earth lodge. 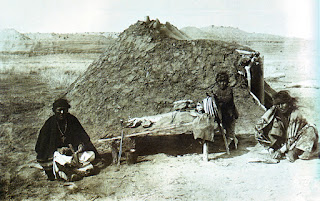 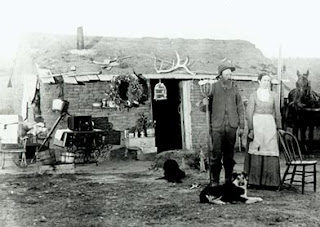 European American homesteaders in front of their soddie 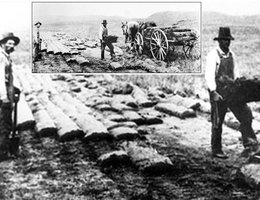 The grasshopper plow had cut the rows of sod, then bricks were cut, dried and used to build a house
The sod plow was also designed specially for the tough roots of prairie grass and enabled farmers to plant their crops.  Eventually many succeeded, and the bread basket of the world began.
Some boast that the 1873 invention of barbed wire in De Kalb, Illinois, made it possible for farmers and ranchers to succeed in the West.  At one time, there were 1500 patents for barbed wire, but Joseph Glidden fought to get his perfected.  The mills of De Kalb operated twenty four hours  a day, but the orders outstripped the production.  Before then, farmers and ranchers had no way to enclose their fields, to keep their livestock enclosed and their crops safe.

When we moved from Texas to our Oklahoma cattle ranch, my father saw all the evidence of pigs.  Immediately he started to fence  the place, three strands of barbed wire at the top and hog netting below.  It was costly, labor-hungry work, but it was possible.  Until 1873, it wasn’t.

Unfortunately, this invention also had a disastrous effect: the closing of the Open Range.  Open Range ranches were a valuable money-making feature of the West, employing thousands of cowboys to herd the cattle.  The movement south before the brutal winter storms was essential.  The Big Die-out was so severe that range wars and fence cutting virtually stopped, and open rangers gave up.  Thousands of head of cattle froze.  The US supreme court decided that barbed wire and enclosed ranches and farms were there permanently; fence cutting became a punishable offense.  Fences must enclose legally owned land and the owners must un-fence public roads and gates.
The concept of Manifest Destiny also entered into Westward Expansion.  Sod house owners and homesteaders often felt that freedom and agriculture were linked.  They felt that their freedom from debt and worry came about because they could build, then live in, their home from the prairie.
Manifest Destiny, first begun by journalist John O'Sullivan, stated that American freedom depended upon pioneers settling to the edge of the Pacific Ocean.  It was their right and responsibility.
By the time the plains were filling up, Native American leaders like Red Cloud had begun to see that fighting the White rulers was futile.  Indian and Army Wars continued.  The stage was now set for an armed confrontation, and only decisive action by Indian leaders and US troops prevented bloodshed.
The next year, the US government asked 8,000 Sioux to the Red Cloud agency to negotiate a treaty.  Red Cloud, the Sioux leader, agreed with his tribe that the US seemed to have a huge population and unlimited resources.  They knew that the life they'd known for centuries on the Great Plains, was ending. Soon, their life as nomads and rulers of the plains would end.
But he left the discussions without signing a treaty (as did many others).