Wild, Wild Horses of the Frontier by Shirleen Davies

Swift, robust horses from Spain and Portugal carried Conquistadors through jungles and across deserts in search of gold in the New World. Then, in the 1600’s, Spanish colonists raised these same types of hardy horses on ranches in New Mexico. A few of these horses would run off from time to time and roam the open plains. These wild horses came to be known as Mustangs, from the Spanish word mesteno, which means stray or free-running animal.

Settlers from many countries arrived and built     ranches on the plains.  Some of their horses,   Morgans, and draft breeds like Percheron,   Belgians, and Clydesdales, also escaped from   settlers or were turned loose to join the wild   herds. Runaway cavalry chargers, and horses   that had belonged to Native Americans, also   mixed with the original mustang herds. In   addition, some stallions were released on   purpose to improve the traits of the horses already there.

In the mid 1800’s millions of wild mustangs roamed America’s plains and prairie, feeding on a variety of grasses and drinking from lakes or streams. Mustangs rambled across the western half of the country including Texas, Nevada, Arizona, Utah, Colorado, Wyoming, Idaho, Montana, Oregon, North Dakota, New Mexico, and California.

The land that lay between the Rio Grande and the Nueces River in Texas was known as the Wild Horse Desert. So many Mustangs ran there that a ranger in the mid-1800s came upon a herd that took an hour to pass. He stated, “As far as the eye could extend on a dead level prairie, nothing was visible except a dense mass of horses.”

Types of Horses in Wild Herds

A lot of different bloodlines went into these herds. Mustangs bear the unmistakable marks their Spanish ancestors and the domestic breeds added to them. Some herds carry the genes of thoroughbreds, quarter horses, carriage horses, trotting and pacing horses, gaited saddle breeds, heavy draft horses, and some show Morgan or Shire ancestry, while others are descended from ponies.

Breaking a horse, the method of training a horse to be ridden, is also called saddle breaking. It embodies bringing the mustang around to a routine of accepting a saddle, a bridle and the weight of the rider on its back. Capturing and breaking wild horses was a daily part of ranching.

The practice of gentling and training wild   horses was so common place, Marty Robbins   wrote a western song about it. The lyrics to The   Strawberry Roan, tell of getting the blinds on the   horse, saddling it, then mounting him and   raising the blinds. The mustang heaved a big   sigh, and turned his belly up to the sun. He was   the worst bucker the cowboy had ever seen.   The  horse hit on all four hooves and raised up   high. The rider spun in the sky. Then the horse   turned over twice and tossed the cowboy onto   the ground. The mustanger said he’d bet all his   money that there wasn’t a man alive who could   stay on Old Strawberry when he made his high dive.

Each Bronc Buster had his own way of breaking a horse. In the song Strawberry Roan, the cowboy used the popular method of breaking a horse with a blind. A cowboy would blindfold the mustang with a jacket before getting on. And, the moment the cowboy’s butt hit the saddle, he’d yank off the blind.

Another way cowboys broke broncos was by tying the horse to a tree for a few hours without water or feed before saddling it. Or they tied a horse down until he was saddled, then let him loose, and as the Mustang got up, the cowboy would leap into the saddle.

The most important thing to remember in bronco busting was that no matter how many times you got bucked off, you had to keep getting back on until the horse got tired of tossing you to the ground. No matter what method they used to break a mustang, the truly great Bronco Busters never abused the horse, broke his spirit, or spoiled him. 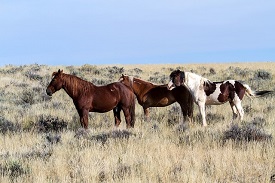 Most mustangs are like any other horse, with a few key exceptions:

·       Having lived in a herd, wild horses understand leadership.

·       They're unspoiled and haven't been abused or taught bad behaviors.

·       They’ve learned wisdom and cunning from their life in the wild.

·       They have a stronger sense of self-preservation than domestic horses.

Because of their sense of self-preservation, it's vital to win the horse's trust in order to train it. Wild horses having grown up in a herd on the range rather than in a stall, have a stronger sense of themselves. They've learned the social protocols of the herd, deference, the ability to function in a social order, to get along with others, what a good leader is, and how to follow a leader. All of this makes them incredibly loyal once they’ve learned they can trust you. And just like any horse, the better the training, the better the horse.

A wild horse has an innate aptitude for reading and understanding movement, energy, intent, and body language. It reads us loud and clear. But, we don't always read the horse well, and that's what we have to avoid. To train a horse properly, we must proceed at the horse's pace and ensure everything is solid before moving on to the next step.

Their Use on Frontier Ranches

Every cattle ranch in Texas and in most Western states used mustangs. These wild horses had ranching in their nature since the original Spanish horses were bred for hundreds of years for ranching in Spain.

Ranchers imported stallions with top European bloodlines and set them free to improve the quality, size, and overall appearance of the local mustang herds. Frontier ranchers used the wild herds as a chief resource for replenishing their working stock. They’d round the mustangs up, and capture the ones they wanted to train for ranch work or to sell to Eastern states, the military, or other ranchers.

I hope you enjoyed this post, and perhaps learned a few things. I’d love to read your comments! 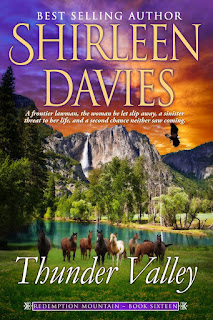