Native American Suffering and the Confederacy by Cora Leland Author

I first learned of Native American allegiance to the Confederacy from my father.  Years later, I plowed through civil war days in Oklahoma for the exact setting book three in my current series required, but came upon this history of Indian suffering that surpasses anything I’d learned from my family.

My research began innocently enough with the capitol city the Choctaw Nation established, Doakstown.   I apologize for this cruel history of profiteering and still more genocide.   On the other hand, I’m glad to pass this along to fellow authors.

I removed all the details; it is now perfectly clean and wholesome.  But researching any leader or town will lash against our comfortably held opinions about this backward part of the United States. A person could begin by diving into the Oklahoma Historical Society’s online site.

A final note about my innocent search for details about the cotton plantations of Doakstown:  I phoned experts in Oklahoma and could find nothing. I’ve been there with my parents many times in my tween years, but to see the Doakstown cemetery and UNESCO marker, I’d have to go there myself. 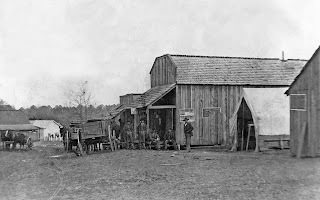 My heroine demanded study of 19th century Indian Territory,  but as I researched  I was surprised to learn that much of the Native American population during the Civil War Era was energetically allied with the Confederacy.  This meant that whole tribes, such as the great Choctaw Nation, and still more of the original Five Tribes aligned with the Confederacy.  (The term ‘Native American’ did not exist in Civil War times, so I do not use it often in this article.)

Although the drought of 1860 was widespread in Kansas (which had sided with the anti-slave States) and farmers and ranchers were greatly weakened, secessionist influence raged. Many of the events that took place in Indian Territory leaked across the Kansas line, but thousands of Native Americans -- entire towns -- of American Indian farmers fled to Kansas, abandoning their homes, crops and livestock as refugees.

When recruiters, southern governmental and private, came to In Indian Territory, the slave holding Choctaw and Chickasaw Nations were especially enthusiastic about the Confederacy.  Their adult men were recruited into mounted rifle units, which later fought in Arkansas and Missouri.  Civilian recruiters toured Indian Territory and Kansas, getting promises of Native American soldiers as early as April 1861 “with astonishing ease.”

The recruiters’ first promise came from the Choctaw and Chickasaw Nations, promising 5,000 men, fully outfitted, for the Civil War. Later letters to Jefferson Davis described the methods these soldiers could use for scouring everything of value from the Missouri line to the Pacific Coast.  From Kansas, a separate battalion of Indians was recruited.  Unlike the Choctaw and Chickasaw soldiers, these Union men weren’t slave owners.

The list seems endless, and much of the heartbreaking poverty in Oklahoma resulted from these decisions.  The five tribes that had been forcibly settled in Indian Territory had recovered before the Civil War. Unfortunately, the Union was silent during the waves of recruitment for garnering Indian support.  Using their own judgment, the Cherokee Nation’s leaders counseled moderation and neutrality, but they were silenced by factions within the tribe.

Other tribes, such as the slave-owning Creek Indians, finally rebelled against the Confederacy.  The leader Opothleyahola guided seven thousand Creek Indians with their wealth, cattle, and everything they could bring away from their reservation lands and outside the territory; war soon resulted.  Finally, the remains of the Creek Nation went as refugees into Kansas.

Indian Territory was seen by both sides, Union and Confederacy, as a buffer territory.  Unfortunately, violence was used to express individual opinions, or possibly incite still more outrageous violence, in Indian Territory without regard to whether people or properties were military or civilian; the rule of law was extinguished.

The constant violence and danger produced thousands of Indian refugees who poured into Kansas, abandoning their homes and land.  By 1864, roaming bands of guerillas were freely ransacking Indian Territory, with successful counter-raids against the guerillas and another tremendous refugee problem.  Quantrill’s Raiders is one example of such a group.  The great Stand Watie is named for much more lucrative activities.

One example of refugees follows.  Two thousand Cherokee people lodged and suffered at Fort Scott, Kansas; many more thousand were commanded to return to Indian Territory when Union troops began their occupation.  Cherokee estimates are that during this time one third of the Cherokee women were widows and one fourth of the children were orphans.    Forts were encircled by the thousands of starving refugees.  The starving refugees were finally fed through a convoluted system involving the removal of the tribes’ herds to government supply camps.

At the end of the War, the tribes were ripped apart, many leaders moving to Washington, others throughout the Union.  One by one, the Nations were divided, with similar histories. Although recruiters had promised resounding victories to the newly-formed Indian divisions of the Confederate military, defeats came during the War.   During the Civil War, high Confederate officials’ promises of victorious battles in Arkansas and Missouri were finally defeats and thousands of Indian soldiers died.

Ultimately, we know, President Lincoln’s insistence on charity to all didn’t quite reach the American Indians.  In 1866 the Five Tribes lost the western half of Indian Territory (as punishment for their association with the Confederacy, though many of them had officially left the Confederacy); the land was given to Indian tribes in Kansas. The tribes of Indian Territory also had to agree to railroad construction through their land and the waves of land-hungry settlers that followed. Good did come to former slaves, who gained citizenship and property rights during the era following the Civil War and before the times of backlash. 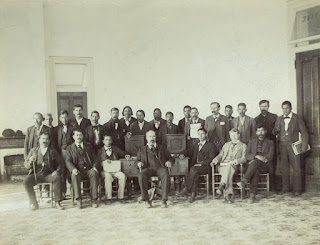 My personal search for my heroine's area settled on the capitol of the Choctaw Nation before the Civil War. Doakstown was also where the Cherokee Confederate general Stand Watie, who owned one hundred slaves -- which back then, indicated an extremely wealthy person -- surrendered in 1865. (Cherokee Stand Watie, born Degataga -- Stand Firm -- was the only Native American fully promoted to the rank of General on either side in the Civil War. After the war, he returned to his life as a tribal leader, planter and businessman.) 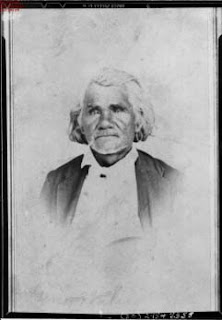 I was most interested in Doakstown, Indian Territory, with its dramatic, sharp decline after the Civil War.   Doakstown’s history was very different from that of the rocky foothills of southeastern Oklahoma and our ranch, though the Kiamichi River influenced both areas.  In fact, cotton plantations were plentiful near prosperous Doakstown.

The Choctaw and Chickasaw peoples practiced cotton plantation agriculture here, with market connections to New Orleans.  Doakstown was originally a trading post at the mouth of the Kiamichi River, near Arkansas; today it’s a ghost town and National Heritage Site.

The effects of the Civil War on what came to be called Oklahoma were vital to my novels, especially the lawlessness the War created and nourished.  Many of my characters moved from Confederate-dominated areas to homestead on the peacefulness of the northern plains.