A dust storm that people later described as a black blizzard swept over the Oklahoma Panhandle area in the afternoon and made it to Amarillo, Texas that same evening. People who left the region later gained the name, 'exodusters'. That the dust bowl years coincided with the Great Depression made the entire decade one of extreme hardship for a large population (estimates of upwards of 2.5 million people) of the United States.*

The dust bowl years were roughly 1931 through 1939, with the worst of the drought between 1934-1937. The map shows the general area of the United States that was affected the most and labeled the ‘dust bowl’ region. I added the green arrow to show where I live, which is right smack dab in the bowl itself.

For people who lived through the “Dirty ‘30s”, dust and dirt became a nearly permanent yellow-brown haze in the atmosphere or it was a series of rolling walls of black dirt depending upon your location. People breathed dust and dirt. It sifted through walls. It found its way into the ice boxes (pre-refrigerators). It settled in bedding. It garnished your meal. People walked in it. Livestock died from dust pneumonia. Children wore dust masks when playing outside and when they walked to and from school.

Even when you were inside your house, when the dirt blew, you wore a wet bandana tied over your mouth and nose to keep from choking on the dust. Crops blew away, and farmers were helpless to do anything to intervene. Women hung set sheets and blankets over windows and doorways in futile attempts to stop the dirt and dust from coming into the house. In some areas, dirt that was fine as sifted powdered sugar would pile in drifts just as snow drifts.

The dirt blew from a combination of prolonged drought and that grasslands had been plowed and planted to wheat and/or over-grazed, which proved to be a poor agricultural endeavor for the particular time and place. So because of this, the top soil was unprotected and vegetation roots were so shallow, that the winds simply scooped up the dirt as it blew along.

If you've watched the mini-series Centennial or read the book by James. A. Michener, you'll recall the episode (The Winds of Death) in which a woman has a total breakdown when she discovers dust on the food bowls inside the icebox. This episode does end happily.

These images are the iconic representations of Black Sunday. Internet location/reference for these images HERE and on the Library of Congress website HERE. 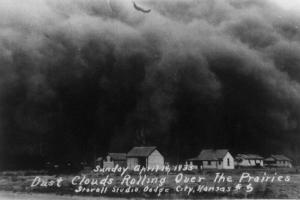 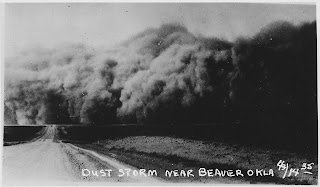 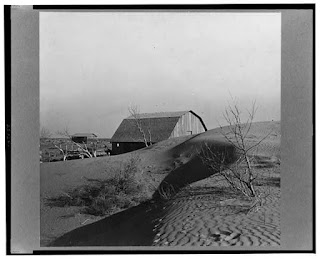 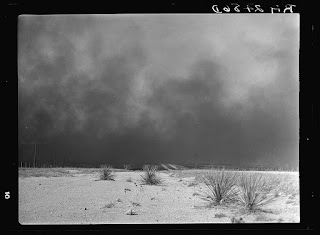 Ken Burns made a PBS documentary in 2012 about the Black Sunday storm. Click HERE for his website and information about this miniseries.
Author Timothy Eagan compiled a book of memories from people living in the dust bowl region. The book is The Worst Hard Time.

In 1936, a short documentary film entitled The Plow that Broke the Plains was released. The purpose was to link uncontrolled agricultural farming with the devastating consequences of prolonged drought that led to the Dust Bowl years. In 1999, this film was selected for preservation in the United States National Film Registry by the Library of Congress as being 'culturally, historically, or aesthetically significant'.**

This is the film. It's grainy and the sound is just as grainy, which makes this video a test of patience to stick with

This is the an excerpt of the music used in the film. It was composed by Virgil Thomson. The sound quality is good. You'll hear familiar American folk music throughout the Suite - 14 minutes long. (There is only this image while the music plays.)

To bring this article full circle, here are the ‘history repeating itself’ pictures that I took on April 22, 2013. This is three miles north of Campo, Colorado on US Highway 287. I could see it coming, so I pulled over instead of driving blindly into it.


There have been a few more dust storms in recent years in southeastern Colorado like the one I took the picture of. They say history repeats itself, and that makes me shudder.


As I don’t send a newsletter, you might consider following me on these social media venues:


*Here are links toreferences in this article, resources, further reading: