The Mountain Man Rendezvous - Party in the Wilderness 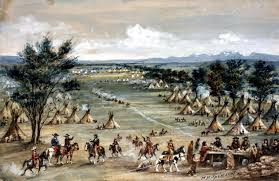 Mountain men and fur trappers blazed trails in the American West long before the wagon trains and settlers crossed the continent. Lewis and Clark traded furs and good with the Native Americans during their explorations in 1804-1805, and more and more adventurers braved the wild mountains west of the Missouri to find their fortune in animal furs.

The mountain man's life was dictated by the seasons and the climate. Most trapping occurred in fall and spring, when animal pelts were at their finest. When the season started, and how long it would go, was ruled by the weather. Spring furs were most desirable because the pelts were still thick from winter.  When the quality of the pelts declined, the season was over. 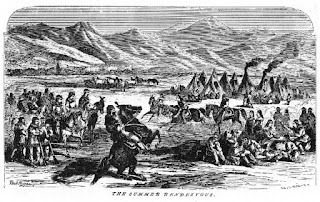 In 1822, two men from Missouri – businessmen, not trappers – advertised for “enterprising young men to ascend the river Missouri…” to trap for beaver. William Ashley and Andrew Henry formed the Rocky Mountain Fur Company, and employed trappers to work for them.
In order to supply their men and keep them in the mountains year-round, they brought teamster-driven supply trains to the trappers starting in the summer of 1825. After rendezvous, the fur-loaded pack trains headed back to Missouri.

Having a few hundred men in the mountains who did nothing but kill beaver assured Ashley and Henry a steady supply of furs to sell. At the same time the trappers, because they didn’t have to make the long trip in from the mountains, were willing to pay high prices for the supplies the company delivered. So Ashley and Henry made money on both ends of the deal. 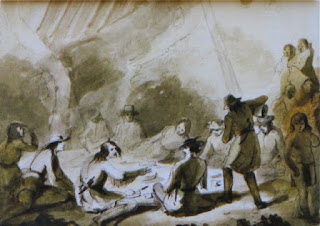 Each year, the location of the meeting places, or rendezvous, was different.
What started as a practical gathering to exchange pelts for supplies and reorganize the company’s trappers into units who strategized where to trap, evolved into a month long carnival in the middle of the wilderness.

The rendezvous brought not only the trappers who worked for the fur companies, but also free trappers, women and children, Indians, French Canadians, and travelers. Besides the trading, there was a lot of socializing to do. Traders, trappers, and their Indian customers, friends, and families, ate, drank, gambled, staged horse and foot races, quarreled, fought, and made love.

An easterner gave his view: "mountain companies are all assembled on this season and make as crazy a set of men I ever saw." There were horse races, running races, target shooting and gambling. Whiskey drinking accompanied all of them. 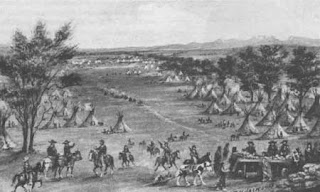 Rendezvous was over when the trappers had spent their year’s earnings on high-priced whiskey, clothing, and supplies needed to last another year in the mountains.

1840 was the last year that Rendezvous was held. Beaver had declined in number, and felt hats replaced beaver hats in popularity. The trappers found other ways to make a living — hunting buffalo for example — or guiding wagon trains. 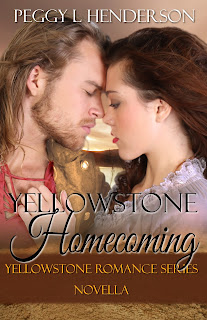 Laughter, loud voices, and gunshots reached them long before dozens of tents, lean-to’s and tipis came into view. Hundreds of trappers, Indians, and even several wagons with traders of all sorts of goods milled about the large open area. Matthew kept a look-out for his comrades. Men he hadn’t seen in years called out a greeting, others stared at him and Addy with interest.
“Stay close,” he said when he caught the look of astonishment on Addy’s face as they passed men who wrestled each other to the ground, knives drawn.
“Isn’t anyone going to stop them from killing each other?” she whispered.
“Most everyone here is drunk. I doubt anyone’s going to die. This is what goes on at these gatherings. Men drink, carouse, and trade their furs. No one would think to break up one of these fights.”
“Barbarians,” Addy hissed. She shot him a disapproving frown when he chuckled at her comment.
“Osborne! Matthew Osborne.”
Matthew’s head turned at the sound of the familiar voice. Jim Bridger rushed around a group of men inspecting a cache of furs. Matthew dismounted his horse, and held out his hand in greeting. The trapper shook it. He cocked his head to the side and looked at him suspiciously.
“It’s Matthew, ain’t it?” he asked, uncertainty in his voice.
Matthew laughed. “Yeah, Bridger, it’s Matthew.”
“I’ll be,” the woodsman said with a loud laugh, and slapped his hand against his thigh. “We thought you was dead.”
“No, just took me a little longer to get here.” He turned to look at Addy, who still sat on her horse.  “I brought Miss Witmer back. Where are my brother and her father?”
Bridger’s eyes widened in surprise. “Zach done told us ya was kilt by them Pawnee. He rode through here about a week ago. Said he was headin’ home to break the news to yer folks.” He glanced toward Addy. “Had us a skirmish with them bloodthirsty Injuns ourselves. Couple of the missionaries got kilt, and a few got hurt, but the rest of us kept our scalps.”
Addy gasped at Jim Bridger’s words.
“Not your father,” Bridger said quickly. He pointed toward the west of the large encampment. “He’s camped yonder with his wagons, past them tipis.”
Matthew mounted his horse. “Thanks for getting them here safe.” He nodded to Bridger.
“Come back and visit with Fitzpatrick an’ me fer a spell when you’re done with Witmer,” Bridger called.
“I will, but I’ll be heading out soon. I need to get home and let my folks know that I’m not dead.”
Bridger laughed. “Good idea. Ain’t every day a man comes back from gettin’ kilt.”