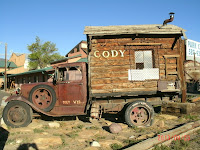 During our recent trip to Montana and Wyoming, I discovered Cody, Wyoming. I had never been there, but always wanted to, partly because I always like the name. My youngest son is named Cody.

I wasn’t disappointed. The museums, attractions, and just the area itself are full of history and grandeur.

One tidbit I learned about was John Jeremiah Liver-eating Johnston. His life was the inspiration behind the 1972 Robert Redford movie Jeremiah Johnson. I’d never realized the movie was based on a real man.

Born in New Jersey in 1824, Johnston headed west to the Medicine Bow Mountains in Wyoming to become a tapper while in his early twenties. A few years later, as a man over six and half feet tall and weighing 250 pounds, he took a Flathead Indian wife and built a cabin near the Little Snake River. His life changed drastically when he arrived home one day to discover his wife and unborn child mutilated on the floor of his cabin. 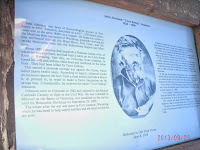 Deciphering they’d been killed by Crow, he went on the rampage against the Crow that lasted 12 years. Legend says he’d remove the liver of those he killed and take a bite out of it, or pretend to, in order to make an impression on his proclaimed enemies, hence giving him the name of Liver-eating Johnston.

In 1862 he went to Colorado and joined the Calvary to fight in the Civil War, though wounded, he continued serving until receiving an honorable discharge in 1865. Afterwards he was hired to provide meat for the Army Post in Wyoming. Later he worked his way into Montana where he started a wood yard to supply wood for the steamboats on the Missouri River. Following that, he became the first Marshal in Billings, Montana and a few years later, the first Sheriff in Red Lodge, Montana. 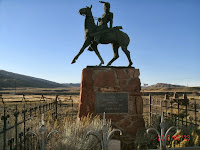 Rheumatism set in during his aging years in the 1890’s and he found relief in the hot springs near Cody, Wyoming. The winter of 1899 his health failed and he was sent to the old soldier’s home in California, where he died in January of 1900.

In 1974, with Robert Redford assisting in his re-burial, Johnston’s remains were transferred and laid to rest in Cody, Wyoming at The Old Trail Town museum.
Posted by Lauri at 10/24/2013