I was recently asked an important question by a fellow author. She wanted to know how ties in with the Devlin siblings in my Texas Druids series. I answered her briefly, but I’d like to give a more detailed answer here on Sweethearts.


Jessie, Tye and Rose Devlin are offspring of Irish immigrants who fled their native land for the in the late 1840s during the Irish Potato Famine. Settling in , where the children grow up, the family might seem like others following the American dream, but they harbor a secret. The three siblings and their mother are descendants of a long line of Celtic Druids reaching back into the depths of time. Each possesses a unique psychic talent they keep hidden for fear of ridicule and ostracism.

A few years after the death of their mother, which sends young Rose running to a convent, Jessie and Tye live through the Great Chicago fire of 1871. You can read about their terrifying experience in White Witch, a novella preceding the trilogy. This prequel also showcases Jessie’s clairvoyant ability.


In Darlin’ Druid, book one of the trilogy, Jessie leaves home in search of a man she has seen in dreams and visions. Her quest takes her west via the transcontinental railroad. Along the way she meets Captain David Taylor, a Texan exiled from home after fighting for the Yankees in the Civil War, Their stormy romance takes them to and a world of trouble, but they end up in , the hero's boyhood home. The last third of the book takes place in the lone star state. 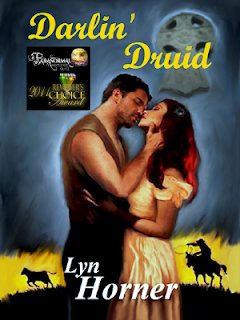 Book two, Dashing Druid, begins in that same location. Tye Devlin is an empath assailed by emotions from everyone around him. He’s learned to block out most of the "racket," but when he meets cowgirl Lil Crawford, he has no defense against her hidden pain, for it echoes his own. Feuding families and a perilous cattle drive -- a bow to , my favorite John Wayne western -- test their love as they fight their personal demons. Their story concludes dramatically back where it started, in . 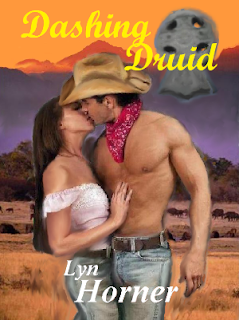 Book three, Dearest Druid, scheduled for release at the end of April, also begins and ends in . Although it’s a Native American romance, the tale centers around Rose Devlin’s power to heal with her mind, a rare gift that draws Indian cowboy Choctaw Jack to her in desperation. Their romantic adventure takes them to the Indian Territory, ca. 1876, but has a hold on both of them that’s impossible to ignore.

And now, here's the cover for Dearest Druid. 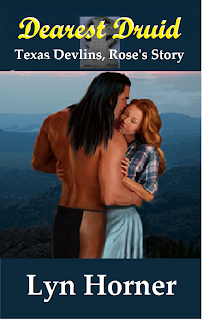 As you see, the design is different from the first two books in the trilogy. As soon as I have a free moment I plan to change the other two covers to match this one. I'm also adding sub-titles and changing the name of the series. Some friends on Amazon's Meet Our Authors forum -- on the "Western Romance Authors Please Post Here" thread -- suggested using the family name. What do you think?


Click on the blue book titles to find them for Kindle and in print on Amazon. Soon to be available on Barnes & Noble.
Posted by Lyn Horner at 4/20/2013