A Short History of Thanksgiving 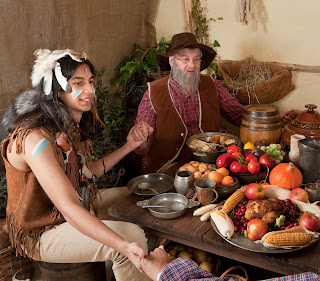 Most of us believe that the first Thanksgiving in America was held in Plymouth in 1621 by the Pilgrims to give thanks for surviving the previous winter and for the recent good harvest.  However, celebrations of thanks had been taking place in the Americas for many years prior.  The Spanish held celebrations in the sixteenth century and areas of what would become the Commonwealth of Virginia had Thanksgiving services as early as 1607, with Jamestown holding their first celebration in 1610.


In 1619 a group of new arrivals settled in an area known as Berkeley Hundred. The Charter of Berkeley Hundred specified a thanksgiving service: “We ordaine that the day of our ships arrival at the place assigned for plantacon in the land of Virginia shall be yearly and perpetually kept holy as a day of thanksgiving to Almighty God.”


But of course, it is the Pilgrims’ thanksgiving that we remember when we celebrate our Thanksgiving today. As many may have learned already, the foods that we traditionally serve today are not even close to what the Pilgrims (or other seventeenth century citizens) served during their feast.  The three day Plymouth celebration included:  geese, ducks, turkey, lobsters, oysters, clams, venison, corn (roasted, parched or soaked in maple syrup), cornmeal, johnnycakes, beans and squash.


Here are two updated recipes for your family to enjoy on Thankgiving:


In a bowl mix eggs, water, milk, lard and salt.  Stir in cornmeal. Stir well before making johnnycakes. For each cake, place ¼ cup batter onto a hot, well-greased griddle, spread to ¼-inch thick. Cook till golden brown, 2 to 3 minutes per side. Serve warm with butter and syrup. Makes 12 to 14 cakes. 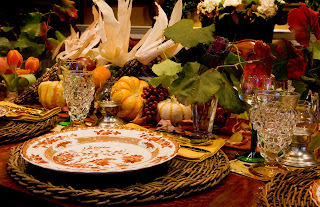 President George Washington proclaimed the first National Thanksgiving in 1789. For the next seventy or so years, each president would or would not proclaim a Day of Thanksgiving, as they wished.  It did not become a national holiday until President Abraham Lincoln made a proclamation in 1863 declaring the final Thursday of November to be a national day of Thanksgiving.  This proclamation tradition held true with successive presidents until Franklin Roosevelt.  In 1939 there were five Thursdays in November, so he proclaimed the next-to-last Thursday as Thanksgiving Day, claiming the extra week of Christmas shopping would help the economy.  At the time, advertising Christmas goods before Thanksgiving was considered inappropriate! This move, however, confused people and states, some of whom already had set celebrations (and football games) scheduled.  Twenty-three states went along with the change, twenty-two did not and some states, like Texas, just celebrated both days.


For 1940 and 1941, both of which had only four Thursdays, Roosevelt kept with his next-to-last Thursday for Thanksgiving.  But the states continued to be confused and most celebrated it when they wanted to. In 1941, Congress decided to take charge and passed a bill making the fourth Thursday of November as the fixed date for Thanksgiving. This was most often the last Thursday, but every so often it is the next-to-last (as it is this year).  Roosevelt signed it into law on December 26, 1941, effective in 1942.  Some states still held it when they wanted to for several more years, with Texas not settling on the fourth Thursday until 1956.


In 1947, The National Turkey Federation and the Poultry and the Egg National Board have given a turkey to the President of the United States at a White House ceremony.  While recent speeches have credited Harry Truman with pardoning the first White House turkey, the Truman Library has no record of him doing so.  President John Kennedy, when presented the turkey, said “Let’s just keep him.”  However, the first official pardon took place in 1989 when President George H.W. Bush pardoned his turkey.  Presidents Bill Clinton, George W. Bush and Barack Obama continued the tradition by also pardoning their turkeys.


Fun Tid Bit: It’s estimated that 48 million turkeys are on the dinner table for Thanksgiving. 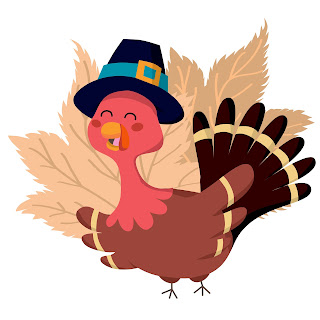 Note: pictures are from dreamstime.com and belong to me. They should not be used without permission.

Never let your memories be greater than your dreams. ~Doug Ivester