Much like writing dialogue,  grounding the reader in another time and place requires balance. I write historical westerns and while I don’t want to create a perfect ‘Gunsmoke’ kind of town for my stories, the actual reality of an old west town can sometimes be a bit too real for the fantasy I hold in my mind.


My own home town is a farm town and more than half Amish. While many people would think it quaint, when farmers start spreading manure on the fields, it stinks. Then with all the buggies in and out of town, it doesn’t take long for piles of horse manure to accumulate in front of the various hitching rails. In the summer, tiny black flies swarm over them.


Imagine an old west town, where everyone rode horses and wagons were pulled by oxen. The streets must have been veritable cesspools of smelly muck. Aside from all the flies, mosquitoes were also attracted to the animals, and out west they often carried malaria, a disease of fever and chills commonly called the ague.


After a rain the streets became a mass of yellow-brown ooze that could almost suck the boots off a man’s feet, and rats lived under the planks of the wooden sidewalks.
Slops and ashes were thrown into barrels outside and garbage piled up in alleys and behind buildings. When broken wagons, wheels and other implements cluttered the yards of farms and ranches, they were burned or carted off to a ‘dump,’ somewhere on the owner’s land.


The farm fresh milk sold in town, carried bacteria and tuberculosis.  Without proper refrigeration, butter turned rancid. Except for seasonal greens like dandelions and pig weed, fruits and vegetables were rare in the westerner’s diet and children suffered from vitamin deficiency, scurvy and scrofulous sores.  Bacon sizzling in a pan over an open fire most likely carried trichinosis as six percent of the pigs at that time had the disease. 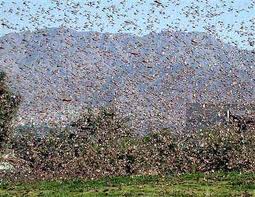 Plagues of grasshoppers and Rocky Mountain locusts moved over the plains in black, humming clouds that were at times 150 miles wide, by 100 miles deep. They stopped trains, ate the bark off trees and could obliterate an entire harvest in a day. Electrical storms caused lightning balls to jump from the horns of cattle and tornadoes could destroy acres of crops.


During winter, the windows were kept closed to keep from freezing, and instead people choked on the fumes from poorly insulated and vented stoves. Long periods of time shut indoors, without contact from any neighbors intensified the loneliness so much that some people went insane.


I do wonder how anyone managed to survive. And as a reader, would you rather visit that time in history with rose-colored glasses or would rather we authors present our stories with the unvarnished reality of the time?