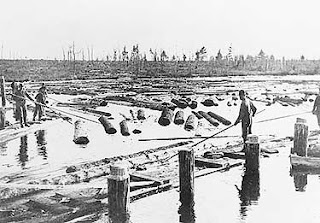 In the late 1800’s Minnesota experienced a tremendous logging boom. Weekly, new logging camps were set up to harvest logs that were then driven (floated) down the waterways to cities including Duluth and Minneapolis by the river pigs (the elite group of loggers who balanced on the logs floating along the raging spring waterways). As fast as the camps formed, so did towns along the rivers. Saw mills and lumber yards were in high demand to process the huge white pines, and other businesses flourished as well, including health care.
In 1887 seven nuns were sent to Duluth to open a hospital using the money provided by patients and donations for charity purposes. However the needs were soon greater than the funds, so the sisters took it upon themselves to become more resourceful and successful. They created the first form of ‘health insurance’.
Sister Amata Mackett quickly became known as the Lumberjack Sister. At almost six feet and weighing close to two-hundred pounds, she walked the woods of Northern Minnesota selling hospital tickets, or chits as they called them, to lumber companies and individual lumberjacks. For over thirty years she collected anywhere from $1.00-$9.00 per ticket per year. The holder of the ticket was guaranteed care at one of the several hospitals that were soon built buy the enterprising sisters’ design. The tickets clearly stated a disclaimer that care was null and void if the injury was due to liquor or fighting. 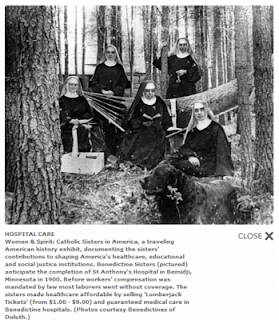 This is the only picture I could find of the sisters. I have no idea which one is Sister Amata. (I first learned about the Lumberjack Sister several years ago while writing a book set in Northern Minnesota. At that time my mother had several old logging books that had been my grandfather’s and one of them included a story and pictures of Sister Amata and her hospital chits, but I have no idea what happened to those books when my mother passed away. I’m hoping one of my siblings have them.)
The Lumberjack Sister’s yearly visits were highly awaited. Besides renewing and selling new chits, she would bake pies for the lumberjacks, darn their socks, listen to their woes, and provide them with spiritual support. She was also known for doctoring their wounds onsite when needed, and if one was late with his payment, she wasn’t afraid to insist upon collecting the fee, which included using a fireplace poker if needed.
The men often provided her transportation to the next camp, which varied from ox carts, wagon rides, horseback, and more than once, the gift of new snow shoes. It is claimed she once fought off a would be robber with her umbrella. The Lumberjack Sister and her tickets faded away after 1913 when the Minnesota legislation passed a law that made worker’s compensation mandatory.
Sister Amata Mackett makes a cameo appearance in my book, A Wife for Big John.

Blurb: At first sight, Dani Jones fell in love- not with Big John, but with his stove. It's the latest model and makes her believe her cooking alone will encourage the Boss Man to let her stay until she has enough money to travel to California and be reunited with the man she promised to marry.

Big John Thompson returns from the spring river drive to find the man he hired to cook for the lumberjacks is a slip of a girl- Danielle Jones. To make matters worse, Miss Jones decides John needs a wife, and sets out to find him one...
A WIFE FOR BIG JOHN is one to keep so when life is “too-much with us”, we can read it again and escape for a time to the timber land of Minnesota to get our faith in humanity reaffirmed. This Happy-Ever-After story reminds me why I love to read romance.—Long and Short of it Reviews.
I definitely recommend reading Wife For Big John. I enjoyed it immensely and you will too!—Two Lips Review Recommended Read.
Lauri Robinson
www.laurirobinson.blogspot.com
Posted by Lauri at 3/24/2012