Everybody give Dac Crossley a big welcome!

A retired professor and noted ecologist, Dac Crossley was raised in South Texas, on tales of forgotten trails and railroad tracks, bandits raiders and Indian attacks, getaways and gunfights, and the strong women who held Texas together. His two South Texas novels, GUNS ACROSS THE RIO and RETURN OF THE TEXAS RANGER, both won awards for excellence. ESACPE FROM THE ALAMO carries on South Texas traditions in an earlier time, when Texas was an independent republic.
Welcome, Dac, to the Sweethearts of the West! You have the honor of being one of our very first guests on our new blog. I wanted the other authors and our readers to become acquainted with you, as I have through your own blog and your novels.
"Thanks, Celia. It’s a pleasure to meet with you and the other Sweethearts of the West."
How did you move from academia to the world of writing western novels?
"When I retired from the University of Georgia, I took a continuing education course – “Murder and Mayhem for Money.” I tried mysteries, killing college presidents and things like that – it was fun. But I hit my voice when I started writing western stories.
I’ve always been a writer of sorts. My mother, a teacher of considerable power, was a storyteller as well as a historian. I took cues from her.
I moved my father from Brownsville here to Georgia for his final decade. We’d go for coffee each morning, and he’d tell me secrets of growing up in South Texas."
In your tenure at the University of Georgia, what was your expertise?
"At UGA I taught courses in various kinds of ecology, and led research teams in the mountains. My training was in entomology. My first job was at Oak Ridge National Laboratory, looking at the consequences of the release of radioactive materials into the environment. That was on-the-job training! We had no idea how to approach that issue. Georgia was the home of ecosystem ecology – the ecology of total systems, man included. That background is important for understanding the West and its people."
I count three novels you have written and released. The first two, Return of the Texas Ranger and Guns Across the Rio, tell stories about Texas Rangers working in South Texas in the Wild Horse Desert area--a no-man's land between the Rio Grande and the Neches River, the area in dispute over ownership between Mexico and Texas. Note: is the river named Neches or Nueces?
"It’s the Nueces River – the River of Nuts."
But your third novel--you said it was a romance!--is a little different. How did you get the idea of writing about a fictitious young man who was a survivor of the Alamo?
"It started as one of those “what if” stories. What if a youngster had managed to escape the carnage? How would he deal with such a soul-shattering secret?
Thanks to my mother, I could recite the story of the Texas revolution before I entered grade school. The Alamo legend continues to fascinate all us old Texans. Here's the blurb:" 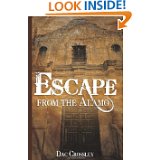 Remember the Alamo! The defenders fought bravely, to the last man, giving their lives for freedom and the Republic of Texas. But suppose one of those warriors survived the battle? What could he do? Where could he go? He's supposed to be dead. Escape from the Alamo is the story of young George Hanks, an ever-grinning Tennessee lad called "Possum" by Davy Crockett. No longer grinning, Possum finds himself on the battlefield at San Jacinto, wounded, confused and alone. He can't go back to Tennessee because they believe he died at the Alamo. What's become of his idol, Davy Crockett? Possum believes that Crockett must have also survived the Alamo battle, and undertakes to find him in South Texas. Possum's journey to manhood takes him through fights with Indians and bandits, arrest and trial, and enlistment in the Texas Rangers.
I know Georgia has been your home for a long time, but I also know in your heart, you're still a "Texas boy." What do you miss most about Texas?
"Yes, thanks, you never quite lose your identity as a Texan, even in exile.
What do I miss? So many images. The crisp, sweet smell of the prairie at a summer sunrise. The big orange sky over the Caprock at sunset. The quiet murmur of Spanish on the night bus. And, of course, Whataburgers and real chicken-fried steaks. Mostly, the soft touch of a Texas friend’s hand on my arm."
How can we order your books?
"Send me an e-mail – soilmite@earthlink.net – and I’ll mail you signed, personalized copies of the books.
Or Amazon, of course."
http://www.amazon.com/s/ref=nb_sb_noss?url=search-alias%3Dstripbooks&field-keywords=Dac+Crossley&x=12&y=15
Thanks for visiting The Sweethearts of the West. We loved having you.
Celia Yeary-Romance...and a little bit 'o Texas
http://www.celiayeary.blogspot.com
http://www.celiayeary.com