Heather’s Choice, book 5 in the MacLarens of Boundary Mountain, is based on present day Marysville and Yuba City, California…an area rich in history and beauty.
The origins of Marysville began when Theodore Cordua leased some land from John A. Sutter in 1842, to raise livestock. Cordua expanded by building a home and trading post. The ranch was also the spot where riverboats from San Francisco and Sacramento, filled with miners on their way to the gold fields, would later dock. Over the years, his holdings grew to a sizable amount of land.
Cordua sold half of the land to a former employee, Charles Covillaud, who struck gold. Cordua then sold the other half to Michael C. Nye and William Foster.
In 1850, the partners hired a surveyor, who drew up a plan for a town, naming it Marysville after Covillaud's new wife, Mary Murphy, a survivor of the Donner Party.
Marysville Growth
In 1851, shortly after Marysville was incorporated as one of the seven-original cities of California, the first mayor was elected. During the gold rush, it grew into one of the largest cities in California, becoming known as the Gateway to the Gold Fields.
By 1853 brick buildings, mills, iron works, machine shops, and factories stood in place of the old miners’ tent city. Schools, churches, and two daily newspapers brought civilization to Marysville with a population nearing 10,000. In 1857 alone, over $10 million in gold was shipped from Marysville's banks to the U.S. Mint in San Francisco. In 1858, the California State Fair was held in Marysville.
The Cannery
In March 1888 the Marysville Cannery was open. The pack for the first day’s run was 20,000 cans of apricots. The cannery packed 18,000 more cases than their guarantee with the stockholders required. The annual payroll rose to about $25,000. Later another fruit packing company was formed—the Marysville Packing Company.
In 1894, W. T. Ellis Jr., was elected mayor of Marysville and served in that capacity through 1898. His main concern focused on the sediment from hydraulic mining on the Yuba River above Marysville. It raised the riverbeds, making Marysville vulnerable to flooding during winter storms and spring run-off. To remedy this, the city built a levee system that still protects the town today. But, that same levee hampered the city’s growth, and the population didn’t increase much after the Gold Rush days. Moreover, the rising riverbeds made the Feather River increasingly arduous to navigate until riverboats could no longer make the trip to Marysville.
Yuba City Origins
Several Spanish expeditions searching for mission sites and rugged fur trappers tempted by the abundant wildlife, journeyed through the region that would later be Yuba City. There is a legend that during one of these trips, wild grapes were seen growing by a river, prompting the area to be names Uba, a variant spelling of the Spanish word uva, which means grape.
In 1841, having built Sutter’s Fort, John Augustus Sutter set his home, Hock Farm, on the bank of Feather River. He located it at the site that is now Yuba City. Hock Farm was the primary agricultural venture in northern California at the time, where Sutter grew grain, orchards vineyards, and raised cattle.
Yuba City Growth
Steamboats landed at Yuba City in 1849 onward, bringing floods of miners to the Gold Rush. By 1852, Yuba City had a population of 150 with a hotel, a grocery store, and a post office. The city became the Sutter County seat in 1856.
The Thompson Seedless Grape
In 1863, William Thompson purchased land ten miles west of Yuba City where he grew grain for a few years. Back then, only three families settled in the flat country between Thompson's ranch and Yuba City.
In 1872, he and his son, George Thompson, were sent three grape cuttings from Almira & Barry of Rochester New York. They grafted them onto the roots of one of their grapevines. But, the vineyard was flooded that spring and only one of the three sprouts grew. All of the seedless grapes of California were propagated from this first vine. The grape was given the name Thompson Seedless Grape.
The Cannery
Agriculture continued to be the economic mainstay of the area. In 1884, the Yuba City Cannery started operations. First with currants, then on July 1, 1887, they canned apricots, packing over 5,000 cases in just two weeks. By 1887, 150 tons of apricots, 225 tons of peaches, 30 tons of pears, and 15 tons of tomatoes were canned there.
This prompted more farmers to plant orchards and enter the fruit production industry. In 1891, fruit was shipped into Yuba City by railroad cars. The following year, quality pack was in high demand in the East. New markets were opening every year with over $75,000 distributed between labor and the farmers from this little cannery in just one year.
Over time, the area surrounding Marysville and Yuba City became an important hub of commerce in northern California. Cattle, farming, and agriculture brought thousands of jobs to the region, making it a shining jewel in the burgeoning western United States.
Feel free to comment on this post below!
Marysville and Yuba City are important landmarks in Heather’s Choice, book 5 in the MacLarens of Boundary Mountain historical western romance series. 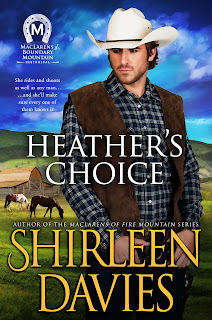 You may also buy direct from Shirleen before the formal release date at:
Shirleen’s Shop