THE BIG PICTURE: HOMESTEADING THE GREAT PLAINS By Cora Leland

In total, 270 million acres (10% of all land in the United States) were settled under the Homestead Act. Homesteading occurred in 30 of our states.  The Homestead Act was extremely progressive. Women, nearly all immigrants, and African Americans had the right to claim free land.

The Homestead Act, signed into law by President Abraham Lincoln in 1862, was the most far-reaching land distribution bill enacted. Previous legislation had sold large tracts of land to railroads and wealthy individuals, but the Homestead Act of 1862 focused on everyday people.

It was signed during the civil war by a congress that did not include the southern states, which had left the government. Two similar acts were passed -- The Morrill Land Grant Act, which declared that states would receive land grants for funding colleges that offered classes in agriculture and mechanic arts.
The Pacific Railway Acts promoted the building of a transcontinental railroad by issuing government bonds and granting large tracts of land to the Central Pacific and Union Pacific Railroad Companies. The U.P. was to build west from Omaha, NE to the Pacific coast, and the P.R. was to build from California east, and they would meet.

Though the Homestead Act did not become popular until after the civil war, it furthered the American Industrial Revolution. It was written to expand the development of the Western part of the United States.  Farmers and ranchers, freshly settled in virgin territories, needed agricultural and animal husbandry tools.  The grasshopper plow, invented in the 1880’s, cut strips of sod the settlers used to build houses. Women AND families who’d received land needed equipment for cooking and storing food, spinning, weaving and sewing, among other things.

But the rate of cancellation - legally and permanently abandoning a homestead - was 50%.  A few plausible reasons were the miles between sod houses; living in sod houses, especially after living in more sanitary conditions prior to migrating to the plains; medical treatment available in some areas, and not in others; crop failure; death of work animals and herds of animals due to the harsh weather and scarcity of water.

All of those reasons are addressed in diaries from those times.  Public and college libraries, state museums and the historical societies in many states have research materials for the public. Solomon Butcher of Nebraska lived in a sod dugout on his homestead, but left to travel through Nebraska taking photos of homesteaders. Some of these are included in this piece.

International tragedies, such as the Panics of 1873, then 1893, reverberated across the prairies.  The final panic was the beginning of a depression that began in 1894 and ended 1897. This was a worldwide disaster, with the fluctuating cotton prices at the center of blame.  Cotton was normally $50 per bale; but in 1870, the price had jumped 56%. The south had planned to rebuild factories and make the economy firm, but the wild price variations made this impossible.

Further blame fell on railroad speculation and reckless private international funding, such as with nearly bankrupt Argentina prior to 1893.  America in the 19th century was plagued with economic instability since 1812.  Economists and historians state firmly that these panics ended only with the Great Depression.

Nonetheless, beginning in 1864, pioneers were creatively settling the wild new territories, building homes out of the materials they found – wood at creek bottoms could be sawed into rough planks to cover dirt floors or build shanties.  When trees were large enough, logs could be used for cabins, and even packing crates could become cupboards.  If there were no trees, prairie grass and mud would serve for bricks. Settler homes were often one room (16 x 10 feet) and furniture was kept to a minimum. One bed could sleep two adults and two children, or pallets were used. Cabin, shanty and soddy walls could be plastered with newspapers and ‘chinked’ to keep out varmints and icy blasts.  With tent-like tarps or linen below them, dirt and snake-dribbling roofs were tamed. Daylight in the dark little houses was increased through the use of wall plastering and ceiling linen.

The garment industry was both more sophisticated during the Industrial Revolution in America and dependent on the old methods of production.  Women worked the machines; some took their piece work bundles to their homes, or to smaller locations to sew on commercial machines. Factories were not centralized.

Diaries and letters speak most often of pioneer women starting businesses for cooking for the men in town ('boarding’), buying lumber and sawing planks to make ‘tables’ and benches, then cooking some of the food and hiring a cook, most usually an immigrant. Other businesses they started included millinery shops, where the owner would make everything but the frame of each hat, or seamstress/tailoring shops, where the owner sewed the clothes alongside her seamstress help.

It is fallacious to assume that ‘the ladies’ were ornamental, and they merely followed their men.  Indeed, women of all ages – the oldest recorded being in her 80’s – homesteaded alone.   Sisters often settled one area, each claiming 160 acres of land. The Act demanded that each build and live in, full-time, a house she built on her own land as head of a household.  The four Chrisman sisters are a famous example (NE History Collection of Butcher photos).

One acre is the size of an American football field; 160 acres equals 6,969,600 square feet. Depending on the shape of a woman’s 160 acres, each sister’s home would be far from the others.

Published diaries from the homestead times are replete with young women new to the sod house plains, expressing their terrors when their husbands left for the fields each day. Sod houses were, some diarists said, smelly, vermin-infested and dirty. Others emphasized that they paid no rent and kept themselves to themselves. Various kinds of sod houses were built. If possible, a soddy could be dug out of the sides of rising ground, if a rise could be found. Or houses were built out of sod, the first layer of the earth, which held the prairie grass, its roots and mud.

Although soddies are often described as being ‘warm in winter, cool in summer,’ diary entries from the plains often say the opposite.  Women wrote that it was impossible to leave the stove at all for months; others describe their feet being frost bitten, despite sitting with quilts wrapped around them in front of the fire.  The roof was capable of collapsing, too, after a few heavy rainstorms.  If the roof didn’t collapse, snakes routinely dropped into the house or crawled in; bull snakes were the most prevalent.

Although mud often fell into pots on the cook stove, homesteaders were careful about their diets.  Army wives often passed on tips, such as how to avoid scurvy. (They said that potatoes contained large amounts of vitamin C and kept scurvy away.)  Homesteaders picked vegetables, preserved fruit and vegetables in many ways, sometimes canning, using mutton fat atop each jar’s contents, or a popular method was ‘bottling,’ a less arduous technique for shorter term storage.  Meat was ‘jerked’ or salted and dried.  A piece of jerked buffalo, unless it was from an old animal, was highly nutritious. Homesteader diaries mention it for taking to eat in the fields.  One piece of jerked buffalo could last for several hours.

Homesteaders in the diaries reveal a sturdy cheerfulness. Women either laughed at hardships, such as a snake falling through the roof and into their beds, or they turned problems into jokes.  A house might seem to rain bull snakes, but the soddy’s residents kept a hoe handy for chopping the snakes and carrying them out when somebody had to open the door. If a woman wasn’t cheerful about her burdens, she was proud of keeping her word to her family.

Millicent had married for love, and her husband proved to be, as she said, ‘unspeakably lazy.’  In a diary, she described the five days before she gave birth to an 11 pound baby. She spun enough wool to weave into cloth, then sewed for her family.  She’d already knitted gloves and hats for them all. Two days before the birth, she operated the loom, with an oiled rag over her stomach so she wouldn’t feel the loom’s harsh bumping. The day before she had the baby, she cut rags she’d saved and made a rug for the largest room.  She finished up by cleaning the house and cooking supper.  She gave birth at 2:43 am.

Although Indian raids made up a small percentage of settler life, they did exist.  Cynthia Ann Parker’s family was killed before her eyes.  Still living, her mother was scalped. Little Cynthia Ann was stolen, but treated as an honored captive for the next 24 years. Of course, she was expected to work along with the Comanche women, who did everything for the band but fight and hunt.  But she’d married a high dignitary who sincerely loved her.  Nomadic hunters, they broke camp every three weeks, and the women dragged the households from one site to the next.

Book lovers and scholars existed among pioneer women. Again, diaries reveal the patience they showed to their molded, decaying books that had fallen from wagons into rivers or been accidentally thrown into fires. Some of the books were entire collections of Shakespeare or poems of their favorite authors. Most carried twenty or more books and kept them long after they’d fallen to pieces, drying them, laying each page out separately, but with the cheerful vigor so characteristic of the pioneer woman.

I was born in Dallas, Texas.  When I was a tween, my Oto Indian father bought a ranch on a rocky mountain in Oklahoma, where we moved into an old log cabin.  Reading the diaries of homesteaders, I sigh at how many bull snakes my poor mother found in her kitchen, and how many tarantulas terrified me.

My father caulked the gaps between the logs, but cold drafts and mice got into the house.  One night at supper the roof caved in (my mother grabbed a board and shoved it under the cracked beam). The school teacher didn’t know how to use a dictionary, the boys carried knives and everywhere bootleggers abounded.  But how I loved my white-hoofed Choctaw pony with her evil disposition. Most of all, I loved my freedom.

I wrote nonfiction beginning with “Letters from Nepal” and published nonfiction until last year. In Dec. 2019 I self-published Christmas at the Homestead, Book 1 of my Mail Order Bride series on Amazon. Book 2 will be released at the end of Jan. 2020. 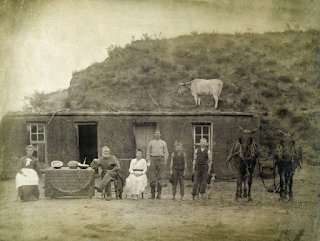 man sisters and a sod house)