We western authors have researched stories of legendary frontiersmen, outlaws, gunslingers, lawmen, and Native Americans.  For this post, I’ve written how and where a few of their stories ended and where they now “rest in peace.”

For many notorious outlaws, the Old West cliché is true, they died with their boots on! Not surprising that a number of cemeteries in the West are named Boot Hill.  The most famous one of all is Boot Hill in Tombstone, Arizona.  And its most famous inhabitants are Billy Clanton and Tom and Frank McLaury, all killed at the gunfight at O.K. Corral on October 26, 1881. 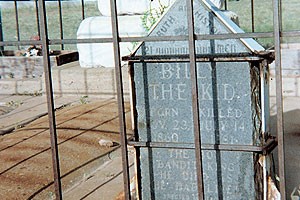 Certainly another outlaw at the top of the numerous list of those lying 6 feet under is Henry McCarty, aka, William Henry Bonney, aka, Billy the Kid.  On July 14, 1881, Pat Garret, the Lincoln County, New Mexico Sheriff was questioning a friend of Billy’s at his home in Fort Sumner, New Mexico. Sitting in a darkened bedroom, Garrett was asking Billy’s whereabouts when Billy unexpectedly entered the room.  Billy didn’t recognize Garrett in the dim light and asked, “Quien es?” – “Who is it?”  These were the last words Billy uttered.  Garrett shot Billy twice in the heart.  Billy the Kid was buried the next day at Fort Sumner cemetery.  He was just 22.  The old Fort Sumner Post Cemetery is near present-day Fort Sumner, New Mexico. 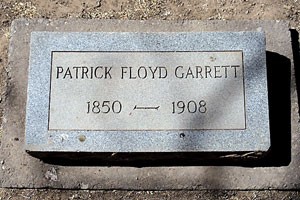 As for lawman, Pat Garrett, (proper name, Patrick Floyd Jarvis Garrett), he endured a sullied reputation from folks accusing him of killing Billy the Kid without warning.  After finishing his term as Lincoln County Sheriff, Garrett wrote (with the help of a ghostwriter), his experiences with the Kid.  He died his own strange death, shot on the road while talking to a rancher who he’d leased grazing rights to in order to pay debts.  Originally buried in Odd Fellow Cemetery in 1908, Las Cruces, New Mexico, Garrett was reinterred in the Masonic Cemetery in 1957.

Outlaw Jesse Woodson James held the well know distinction of gang leader, bank robber, stagecoach robber, train robber, and murderer from the state of Missouri and the famous member of the James-Younger Gang. In 1882, he was killed by a member of his own gang who hoped to collect a reward.  Originally buried at his homestead in Kearney, Missouri, his grave was moved to Mount Olivet Cemetery in 1902.  Jesse was 34 years old. 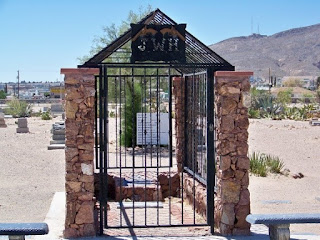 Known as Texas’ most deadly gunman, John Wesley “Wes” Hardin killed over thirty people.  Captured by a Texas Ranger, he was released in 1894 after serving eighteen years in prison.  One year later, Hardin was shot and killed by John Selman, an outlaw-turned-lawman in El Paso’s Acme Saloon.  Selman was gunned down just a year later.  Hardin is buried at the Concordia Cemetery in El Paso, Texas at the age of 42.  Ironically, Hardin’s killer, John Selman is buried just a few feet away.

John Henry “Doc” Holliday was a gambler, gunfighter, dentist and good friend of lawman Wyatt Earp.  He’s best known for his role as a deputy marshal in the events leading up to and following the gunfight at O.K. Corral.  The man suffered nearly his entire life with tuberculosis.  In 1886 he moved to Glenwood Springs, Colorado, hoping that the hot springs vapors would improve his health.  However, a year later after spending two months in bed, he looked down at his bare feet and said, “That’s funny,” and died.  He’d always figured he would have died with his boots on.  He was 36 years old. 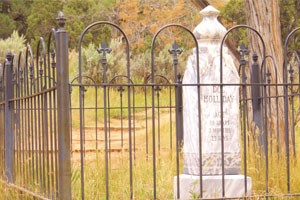 The Glenwood Springs cemetery sits high on a steep hill.  At the time of Doc Holliday’s death, the steep road was too icy so he was buried at the bottom of the hill with the intention of his body being moved when the ice thawed.  But, he never was and many years later, a housing development was built at the base of the hill and though a marker sits in the cemetery, his actual remains are probably buried in someone’s back yard! 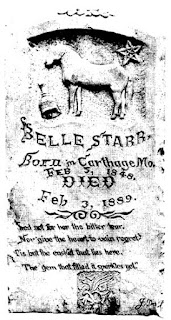 Don’t want to discriminate, for there was also the female legendary “outlaw queen,” Belle Starr who was a horse thief, outlaw and part-time prostitute, and the first woman to be tried for the serious crime of horse thievery by the famous Judge Isaac Parker. In 1889, she was shot in the back and killed by an unknown assailant. Forty years old, she was buried at her cabin southwest of Porum, Oklahoma. Her daughter, Pearl had the following inscription engraved on her tombstone:
“Shed not for her the bitter tear,
Nor give the heart to vain regret,
‘Tis but the casket that lies here,
The gem that fills it sparkles yet.” 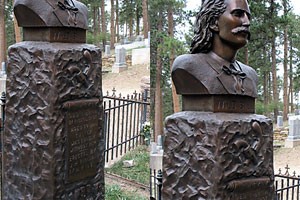 Can’t leave out James Butler “Wild Bill” Hickok, a legend in his time and one of the most famous frontiersmen in the West. On August 2, 1876, he was playing poker at the Nuttall & Mann’s #10 Saloon in Deadwood, South Dakota when he was shot from behind by Jack McCall.  At age 39, lying dead on the floor, Wild Bill was holding a pair of black aces and a pair of eights, which has since been known as the “Dead Man’s Hand.” When in Deadwood, I visited his grave at the cemetery. Calamity Jane, who had long been infatuated with Wild Bill during his lifetime, asked to be buried next to him. Her last request was granted when she died on August 2, 1903. 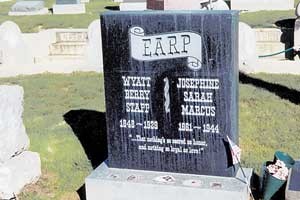 Another famous lawman and gunfighter, Wyatt Berry Stapp Earp, who was marshal of Ellsworth, Kansas in 1873, marshal in Wichita in 1874, and marshal in Dodge City in 1876, spent his final years working mining claims in the Mojave Desert during the winters and summered in nearby Los Angeles, California.  In 1929 at age 80, he died peacefully with his wife, Josie at his bedside.  Earp is buried at Hills of Eternity Memorial Park in Colma, California. 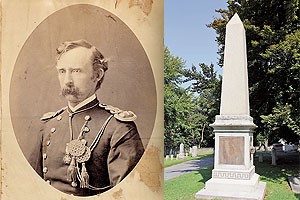 Lt. Col. George Armstrong Custer’s death became one of the most famous American legends known as “Custer’s Last Stand.” Custer finished at the bottom of his West Point class in 1861, yet led courageous service during the Civil War, only to lead his 7th Cavalry troops to their demise at the Little Bighorn Battlefield in 1876. He was 36 years old and is buried at West Point, New York. 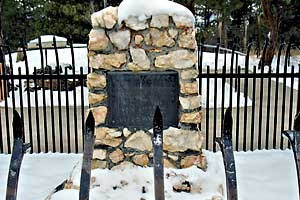 In a previous blog, I had reported on Buffalo Bill Cody, the greatest showman the Old West ever knew and his extensive museum in Cody, Wyoming.  After his death in 1917, he was buried on Lookout Mountain in Golden, Colorado.  He was 70 years old. 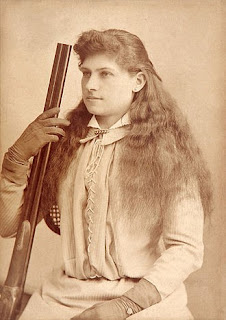 Speaking of Buffalo Bill, I’d also like to add Phoebe Ann Moses, a sharpshooter who rose to fame in a way most men could only dream of doing and became a legend in her own time!  She was known as Annie Oakley.  Buffalo Bill cast her as “Little Sure Shot” and she did trick shooting with his Wild West show for 16 seasons.  Even at age 60, she was still performing and winning shooting contests. 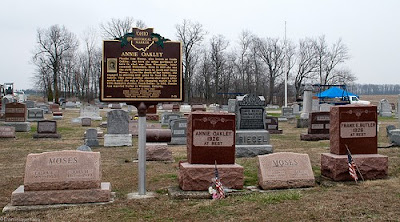 Her health declined in 1925 and she died of pernicious anemia in Greenville, Ohio at the age of 66 on November 3, 1926. Her body was cremated in Cincinnati two days later and the ashes buried at Brock Cemetery near Greenville, Ohio. Assuming their marriage had been in 1876, Oakley and he expert marksman husband, Frank Butler had been married just over 50 years.

Butler died 18 days later in Michigan. His body was buried next to Oakley's ashes, or, according to rumor, Oakley's ashes, placed in one of her prized trophies, were laid next to Butler's body in his coffin prior to burial. Both body and ashes were interred in the cemetery on Thanksgiving Day (November 25, 1926).

Happy Trails To You! 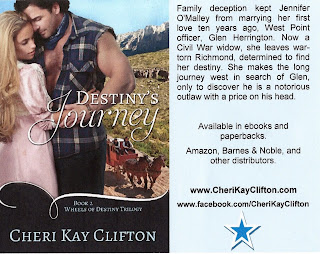 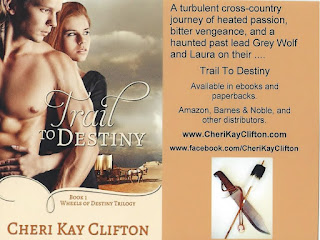