The Unnecessary War by Zina Abbott 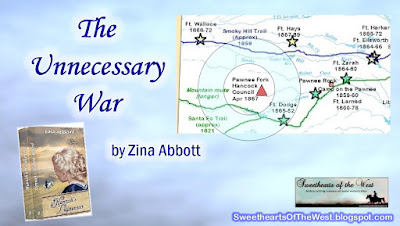 Once the American Civil War ended, the U.S. Army turned its attention back to dealing with the hostilities between the white Americans and Plains tribes. Part of their effort involved making treaties where the tribes –primarily Cheyenne, Arapaho, Sioux, Comanche, Kiowa, or Plains Apache—gave up rights to certain lands in exchange for reservation land plus annuity payments in food, hunting weapons, and ammunition. White Americans did not really care about any territory rights the tribes still held. Native tribes retaliated when the perceived whites had violated the treaties.

An incident on the Kansas frontier in 1867—now known as Hancock’s War—is an example of the disasters that took place due to incompetence, intolerance, and misunderstandings. It is also known by some as “The Unnecessary War.”

Part of the misunderstandings came about because generals and other high-ranking officers who performed well in the Civil War were not suited to dealing with the Native Americans. In addition to having an arrogant contempt for tribal people as a whole, they did not understand the Native way of thinking or the way their leadership was organized. In addition, they were disinclined to listen to their own Indian agents who had developed a certain rapport with the different tribes.

After several tribes carried out a series of raids and confrontations because they felt certain treaties had been broken by white Americans (in most cases, true), many generals, including Gen. William T. Sherman, then assigned to oversee the Kansas frontier region, wished to carry out a revenge expedition. Gen. Grant decided against it. Instead, he directed Gen. Winfield S. Hancock to intimidate the people of the tribes into remaining peaceful. Hancock did not have authority to make any new treaties. However, he did intend to restore peace by forcing them into submission. He intended to accomplish this with a display of military might. 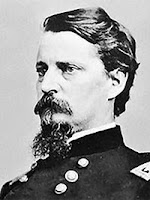 Gen. Hancock was confident in his ability to bring the tribes under control and intimidate them into falling into line with United States interests. He raised a force of 1,400 soldiers involving  seven companies of the 37th Infantry under Capt. John Rsiha, eight companies of new 7th Cavalry under Col. (brevet Lt. Maj. Gen,) A. J. Smith, a battery of 4th Artillery commanded by Capt. Charles Parsons (brevit lt. col.) and some Delaware Indian Scouts, also a few white scouts including “Wild Bill” Hickok.

Also, Leavenworth (The man, not the fort, the Indian agent of Kiowas and Comanches) and Wyncoop (the Indian agent of the Cheyenne and Arapaho) came. They repeatedly offered advice regarding the best way to negotiate with the tribal leaders, but were, for the most part, ignored.

From Ft. Larned, Gen. Hancock sent word to the surrounding tribal leaders that he expected them to come to the fort. He wished to speak to them, but he wanted to address them all at the same time. From among the tribes’ leaders, several stood out to officers at Fort Larned by March 1867, including Satanta and Kicking Bird of the Kiowa; Tall Bull, White Horse, Bull Bear, Roman Nose, and Black Kettle of the Cheyenne; and Little Raven of the Arapaho.

A few of the chiefs met with Hancock at Fort Larned. Although they kept insisting other chiefs were on their way, they repeatedly resisted all gathering in one place at the same time.

Hancock concluded the meeting by indicating that he wanted to meet with the other chiefs. He and his troops rode west of Fort Larned toward a combined Cheyenne and Lakota village at Pawnee Forks. On April 13, 1867, as Hancock and his men approach the village, several chiefs came out to meet them. They said they would meet with the general the following day at the location where the Army set up camp.

Gen. Hancock insisted he wanted to come into their village at Pawnee Forks to talk to the chiefs.

Worried about the fates of their families, the Cheyenne chiefs and their Lakota Sioux allies resisted. It had been only three years since the massacre at Sand Creek where a village of Cheyenne under Black Kettle and some Arapaho were massacred by a unit of Colorado Volunteers.

Insisting on having his way, on April 14, 1867, Gen. Hancock ordered his troops forward. As the army drew nearer the village, a group of about 300 Cheyenne warriors—dressed in full battle array—rode out to meet them, mirroring the army’s display of military strength. 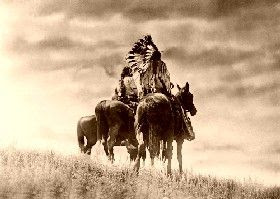 Gen. Hancock and his forces continued to move forward. Before reaching the Cheyenne camp, they were met by a large body of Indians waving a white flag. The Chiefs said they wanted peace instead of War.

Colonel Ned Wynkoop, the Cheyenne and Arapaho Agent at Fort Larned from 1866 to 1868, rode out between the lines to ask the warriors to stay calm and stay put. The warriors agreed. The Army troops marched to within one mile of the village and set up camp.

Fearing that the Army intended to attack their village, the women and children—along with many of the men to protect them—fled the village. They left their lodges and belongings—including most of their food—behind.

Gen. Hancock, talked and acted as though he could not understand of why the people would flee. Offended that they would have the audacity to take independent action, he demanded the return of the villagers. Some of the Cheyenne warriors obliged Hancock and rode to look for the women and children, but returned empty-handed. However, after observing the general’s anger and fearing retaliation, they fled without staying for any “talks.”

Gen. Hancock was far from acting in good faith with the Cheyenne. On the sly, he ordered Col. Custer’s 7th Cavalry to surround the village that night to keep them from running. However, Custer and his men either got there too late, or the villagers escaped past them.

Custer pursued them the next day. He discovered two stations of the Overland Stage Company on the Smoky Hill Trail had been raided and several people killed. He sent back word it must have been the escaping Cheyenne. He later realized it could not have been them (It was the work of the Lakota chief, Little Raven, and his warriors, who left the Cheyenne village shortly after Gen. Hancock and his troops arrived.) By the time Col. Custer sent another message saying, because of timing, it could not have been the Cheyenne, it was too late for the village.

On April 18, 1867, Hancock, contrary to Indian Agent Wyncoop’s advice, confiscates all Cheyenne goods and burned the village. He justified it by claiming the Cheyenne were “a nest of conspirators.”

Enraged, the Cheyenne vowed revenge. They waged war, not only on the U.S. Army, but on any white Americans whose paths they crossed. 1867 was considered an “unprecedented season of violence on the plains of Kansas.”

For more details about his incident, as well as some of the quotes by participants I used as chapter headers, please CLICKHERE.

I featured this incident in my book, Hannah’s Highest Regard, the second book in the box set, Hannah’s Lieutenant, I recently published. The box set is available in both ebook and print formats.