Ready to Wear by Lauri Robinson

New clothing was not overly accessible to most men and women in the west. When you needed a new set of ‘duds’ you had to go to a tailor or dress maker and have them made. Very few ‘mercantiles’ sold new clothing, however, many did sell ‘ready to wear’ clothes. These were outfits discarded by the higher class, or just those that had ‘out grown’ their clothes and needed a new set. 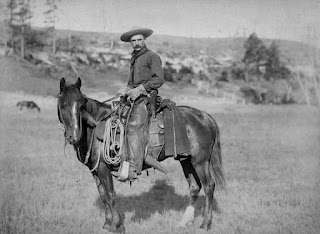 It wasn’t unusual for cowboys to wear suit pants and a vest (silk not leather) while riding the range, because the ‘fancier’ the clothes, the harder it was for the store to sell them. Therefore, the ‘fancy duds’ sold for cheaper. That also explains while chimney sweeps always wore top hats and tuxedos. Cheap wear for a very dirty job.

There was big business in ‘ready to wear’ clothes for all the people moving west, and entrepreneurs would scavenge the ‘castaways’ discarded by the wealthier set back east and drive wagons of clothing west, peddling their wares as they went.

In my November 1st release from Harlequin, Unclaimed Bride, heroine Constance Jennings had to sell several outfits in order to pay for food and shelter before she left New York for Wyoming as a mail order bride. Hence, upon her arrival, it’s bitterly cold and she has no coat—yes, she sincerely regrets selling it—especially when it means Ellis Clayton, a complete stranger, has to buy her a new one at a very exorbitant price, indebting her to him even more.

Running from the past…she bumps into her future!

Mail-order bride Constance Jennings steps off the stage in Cottonwood, Wyoming, and waits for her husband-to-be. But he never shows up, and instead several other men are vying to take his place!

Single father Ellis Clayton must be the only man in town not looking for a bride. But his young daughter's habit of rescuing wounded critters means he ends up offering Constance a temporary shelter.

Having a woman around the house again is all too easy—especially seeing her bond with his daughter—but Ellis can't seem to let go of the past. Problem is, neither can Constance. And hers is about to catch up with her….

www.laurirobinson.blogspot.com
Posted by Lauri at 9/24/2012