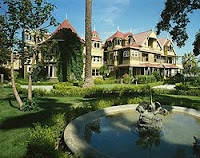 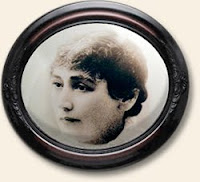 The couple had one daughter, Annie Pardee Winchester, who was born on July 12, 1866, but died after a few weeks from the childhood disease marasmus. Sarah fell into a deep depression following the death of her daughter, and the couple had no more children. Oliver Winchester died in 1880, quickly followed in March of 1881 by William, who died of tuberculosis, giving Sarah approximately 50 percent ownership in the Winchester Company and an income of $1,000 a day. (This amount is roughly equivalent to $22,000 a day in 2008.)

According to the legends surrounding her, she felt that her family was cursed, and sought out spiritualists to determine what she should do. A medium, believed to be a psychic, allegedly told her that the Winchester family was cursed by the spirits of all the people who had been killed by the Winchester rifle, and she should move west to build a house for herself and the spirits. The medium is claimed to have told Sarah that if construction on the house ever stopped, she would die. In 1884, Sarah moved west to California and purchased an eight-room farmhouse under construction from Dr. Robert Caldwell. It stood on 161 acres of land in what is now San Jose, California. Immediately, she began spending her $20 million inheritance by renovating and adding more rooms to the house, with work continuing 24 hours a day, 7 days a week, 365 days a year for the next 38 years. She was fascinated with the number 13 and worked the number into the house in many places. (There are thirteen bathrooms, windows have thirteen panes, thirteen chandeliers, and so forth.) 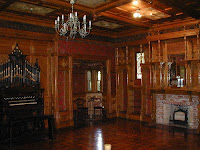 It estimated that 500 to 600 rooms were built, but because so many were redone, only 160 remain. This naturally resulted in some peculiar effects, such as stairs that lead to the ceiling, doors that go nowhere and that open onto walls, and chimneys that stop just short of the roof. 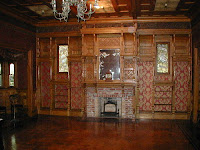 We may never know for sure if Mrs. Winchester built her house to accommodate the spirits, but over the years the story has come down that she believed her life was unavoidably affected by departed souls. Presumably she wanted to be friendly with the ‘good’ spirits and avoid the ‘bad’ spirits – and the way to be friendly with the ‘good’ spirits, it seemed, was to build them a nice place to visit. 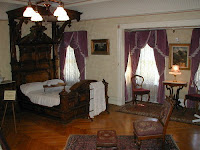 According to this theory, Mrs. Winchester accommodated the friendly spirits by giving them special attention. For example, it is said that there were only three mirrors in the entire house at the time of Mrs. Winchester’s death. Legend has it that spirits hate mirrors, since the sight of their reflection causes them to vanish.
This is why Mrs. Winchester’s servants and secretary reportedly used only hand mirrors or went without.

The mansion also contained a profusion of light sources, from gas jets and countless candles, to electric light bulbs. Supposedly spirits feel conspicuous and humiliated by shadows, since they cannot cast their own.

The outside of the mansion received nearly as much care and attention as the inside. The cast external façade is bursting with Queen Anne Victorian architecture features like turrets, towers, curved walls, cupolas, cornices, and balconies, all outlined with finely detailed trim work.

When viewed from different angles, the towers, some topped by ornamental spires called finials, give the house a castle-like appearance. It’s an extravagant maze of Victorian craftsmanship – marvelous, baffling, and eerily eccentric, to say the least. Some of the architectural oddities may have practical explanations. For example, the switchback staircase, which has seven flights with forty-four steps, rises only about nine feet, since each step is just two inches high. Mrs. Winchester’s arthritis was quite severe in her later years, and the stairway may have been designed to accommodate her disability. The miles of twisting hallways are made even more intriguing by secret passageways in the walls. Mrs. Winchester traveled through her house in a roundabout fashion, supposedly to confuse any mischievous ghosts that might be following her. Because of the mansion’s immense size, it contained forty-seven fireplaces and seventeen chimneys. One rambling section in particular, the Hall of Fires, was designed to produce as much heat as possible. 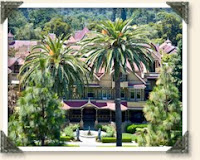 My Aunt used to take us to visit this magnificent house every summer. One of my children refused to go inside because she could feel the intruders, the ghosts from the past. I never saw any ghosts, but found the story intriguing all my life.