THE SEWING MACHINE by E. Ayers

I hate when I read a book that has a major historical error. Certain things jump at me and when I know someone got it wrong…That happened to me recently when the story had a woman sewing at home on a machine in the old west.

Let’s look at the sewing machine. For starters, these machines were considered commercial machines and not for home use. It would take quite a few years before a machine would be produced for home use, but I’ll get there.

The first sewing machine was invented in the late 1700s by Thomas Saint and was meant for working with leather. No one knows if he even attempted to build such a machine. But years later someone tried to build his machine and had to tweak it slightly to make it work. Thomas patented it as “An Entire New Method of Making and Completing Shoes, Boots, Spatterdashes, Clogs, and Other Articles, by Means of Tools and Machines also Invented by Me for that Purpose, and of Certain Compositions of the Nature of Japan or Varnish, which will be very advantageous in many useful Appliances.” It was hand cranked. He died a pauper.

In the early 1800s, there were quite a few patents for sewing machines. A Viennese tailor Josef Madersperger patented his invention. He built his and several more. The first one only did a straight stitch, but the others could sew circles. It’s believed he was trying to find a machine that would embroider. He never made one for commercial release. Instead, he spent his entire life and all of his money attempting to make it better. He died a pauper.

In France, Barthélemy Thimonnier invented a machine that used a barbed needle and made a chain stitch. He produced 80 machines and was awarded a government contract to produce uniforms for the French Army. Seems the other tailors didn’t like invention and figured he’d put them out of work, so they came with torches and burned everything to the ground. He narrowly escaped and created a new machine that was even better. The tailors struck again and Barthélemy Thimonnier managed to save one machine. He went to England and tried there but died a pauper.

Inventing a sewing machine wasn’t such a great idea.

It was in the USA where well-known inventor, Walter Hunt, (he invented the safety pin among other things) invented a machine using two needles and created a lock-stitch. He hoped his daughter could use it to make corsets. Then he worried if such a machine might hurt the tailors and seamstresses, so he abandoned his design and never filed for a patent.

In 1846, Elias Howe came up with almost the same design. His design worked so well he staged a man vs machine event with five seamstresses, and his machine beat them and was obviously superior. He couldn’t find a buyer for his invention. He continued to improve his design. He went London and eventually returned to the USA totally broke only to discover that others had taken his patent and were making machines based on his design. He sued them and won. 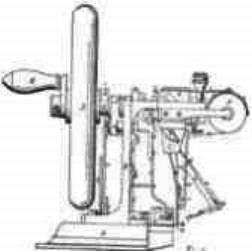 Along came Isaac Singer, a machinist, and he’d invented a machine that was totally different from Howe’s except for one thing, that needle with the eye near the point. The little needle cost Singer a small fortune. But Singer approached other sewing machine manufacturers who had lost to Howe and devised a scheme for them to share patents. In the beginning, they had to pay Howe $25 for each machine they sold. Eventually they got that amount down to $5 per machine. (To give you an idea as to how expensive $25 was, it was a year’s salary for most men!)

It was 1858 when Singer introduced the first personal sewing machine called the Grasshopper. It was the end of the Civil War when Singer made the Family Sewing Machine. By 1889 Singer created the first practical electric machine. And it was 1933 when the Featherweight came into being.

Howe died a very wealthy man in 1867. But it was Singer who is best known for the sewing machine. Why? He was a promoter and very good at it. He also was the first person to ever spend a million dollars on advertising. 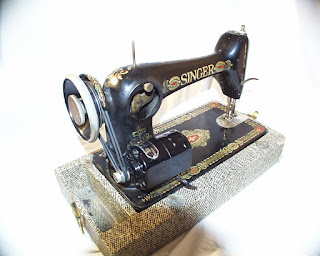