The 1865 Ambulance Attack that Inspired My Plot by Zina Abbott 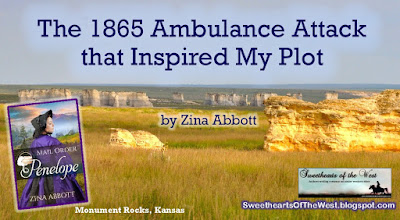 My third book in the trilogy I wrote for Widows, Brides and Secret Babies, Mail Order Penelope, involves the use of a 1860s-era ambulance. I discovered in my research that, on the prairie, ambulances were not used only for transporting the sick. Often, senior officers, or the families of officers, rode in Army ambulances rather than paying to ride the stagecoaches. I drew inspiration for using an Army ambulance and the attack against it from a real incident in Kansas frontier history. This incident took place on the Smoky Hill Trail—the same road on which my hero and heroine travel. Dr.
In my story set in October 1867, Penelope with her fourteen-month-old son is traveling to Pond Creek, the community of contractors working on nearby Fort Wallace. It had its origins in the stagecoach station built there in 1865. Marcus, a post surgeon temporarily assigned to Fort Hays to deal with the cholera epidemic that hit that fort especially strong in July and early August, is ready to return to his usual post, Fort Larned. Before he goes, he is requested to take the ambulance and travel with the same escort patrol that will protect the stagecoach leaving adjacent Hays City. In my book, the Fort Hays remarks that Marcus better not let the Cheyenne destroy his ambulance the same way they did Dr. Whipple’s.

The incident of Dr. Whipple’s ambulance being attacked took place November of 1865. The story was told by Theodore H. Davis, who was an artist for Harper's New Monthly Magazine, when he came west to make sketches of life on the prairies. Although he made this trip in late 1865, his article did not appear in the magazine until July, 1867.

(Please note: I reproduced this account verbatim using the language of the day which might be offensive to some Native Americans today. I intend no offense.)

We left Monument early on the morning of the 25th, to continue our journey. An ambulance, containing a surgeon and for men, accompanied us as well as the escort of five cavalrymen. The next station was twenty-two miles distant.

When within two hundred yards of the adobe we glanced back to see the country over which we had passed, and discovered, within sixty yards of the coach, a band of nearly one hundred mounted Indians, charging directly toward us. This site, frightful as it was, seemed grand. “Here they come!” and the crack of a rifle was responded to by a yell, followed by the singing whiz of arrows and the whistle of revolver bullets. The first shot dropped an Indian. Next a pony stopped, trembled, and fell. The driver crouched as the arrows passed over him, and drove his mules steadily toward the station. The deadly fire poured from the coach windows kept the majority of the Indians behind the coach. Some, however, braver than the rest, rushed past on their ponies, sending a perfect stream of arrows into the coat as they sped along. We were by this time in front of the station. The cavalrymen opened with their revolvers, and the Indians changed their tactics from close fighting to a circle. One, more daring than the rest, was intent on securing the scalp of a stock-herder whom he had wounded. He lost his own in doing so....
From the adobe we discovered a site that was not to be looked at quietly. The four mules attached to the doctor's ambulance were flying across the plains at a dead run. Indians enveloped the ambulance like a swarm of angry hornets. The men in the ambulance were fighting bravely, but the Indians outnumbered them ten to one. If rescue was to be attempted there was not an instant to lose. The five cavalrymen were sent off at a gallop. Seeing them, the men in the ambulance jumped out and ran through the Indians toward them, rightly conjecturing that the Indians would secure the ambulance before turning to attack them.
It was a plucky thing to do, but the doctor determined that it was their only chance. The Indians caught the mules, then turned to look for scalps, which they suppose were to be had for the taking. The doctor and his men were giving them a lively fight when we came up. The value of a well-sited and balanced rifle was soon evident. With every crack a pony or an Indian came to the earth. This fire was evidently unendurable, and the circle quickly increased in diameter, when, with the rescued men mounted behind, we slowly moved toward the station, before reaching which two more dashes were repulsed.

The strain on the nervous system of the rescued men must have been intense. As we reached the station one of them broke down completely and sobbed like a child. The doctor was one of the gamest of little men. “Ah,’ quoth he, as he gazed through the glass at the crowd of Indians about the ambulance, “I put the contents of the tartar emetic can into the flour before I left the ambulance, and if that does not disorder their stomachs I won't say anything – I wish that it had been strychnine!” 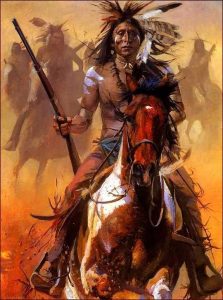 A redskin had mounted each of the mules, and as many Indians as the vehicle could contain had located themselves in the ambulance for a ride. The cover had been torn off, as it probably impeded their view. Becoming tired of this, they detach the mules, unloaded the ambulance, and drew it to a point which afforded as the best view of their performance; when greatly to the indignation of the doctor, they crowned their disrespect for him and his carriage by setting fire to what he declared to be the best ambulance on the plains.

Starting in 1865 and continuing through 1868, between the stagecoach line, the coming railroad, and the increase of white settlers, the Cheyenne along with their Arapaho and Sioux allies, made frequent attacks in an effort to drive what they considered invaders from their prime bison-hunting grounds. This incident was just one of many examples of the confrontations between the white Americans and the Native Americans. It was a volatile time on the Kansas frontier. I certainly have enjoyed learning more about it and incorporating this history in my writing.

In Mail Order Penelope, Penelope plans to travel to Pond Creek Station near Fort Wallace. Her stagecoach is joined by an Army ambulance carrying Dr. Marcus Garrett who is heading west to treat soldiers injured in a Cheyenne attack. Both vehicles come under attack before they reach Fort Monument, the jumping-off station before the attack described above. An incident at another station, where she runs into some cavalry soldiers stationed at Fort Wallace, changes her mind. You may find the book description and purchase link by CLICKING HERE.

In my most recently published book, Hannah’s Highest Regard, the story also takes place in Kansas. As a matter of interest to me, during part of this trip that Mr. Davis has published in the Harper’s Monthly, he tells of an incident where Charley Bent, son of William Bent and his Cheyenne wife, who rode with the Cheyenne Dog Soldiers and was part of the attack on the stagecoach lines. Charley asked the whites at the station if the treaty had been signed. He probably referred to the Treaty of the Little Arkansas signed a few weeks before this trip. My prologue in Hannah’s Highest Regard touches on that treaty. You may find the book description and purchase link for that book by CLICKING HERE.

The first book about Hannah Atwell, the one that introduces us to Jake Burdock, is titled Hannah's Handkerchief. You may find the book description and purchase link by CLICKING HERE.