A LITTLE TIDBIT ABOUT THE CROW TRIBE by E. Ayers

This is taken from: Indian Education Division, Montana Office of Public Instruction

1851 – The Fort Laramie Treaty with the Crow, Sioux, Cheyenne, Arapaho, Shoshone, Assiniboine, Mandan, Hidatsa, and Arikara. The Crow boundaries identified 38 million acres as the tribe’s territory: “The territory of the Crow Nation, commencing at the mouth of Powder River on the Yellowstone; thence up Powder River to its source; thence along the main range of the Black Hills and Wind River Mountains to the head-waters of the Yellowstone River; thence down the Yellowstone River to the mouth of Twenty-five Yard Creek; thence to the head waters of the Muscle-shell River; thence down the Muscle-shell River to its mouth; thence to the head- waters of Big Dry Creek, and thence to its mouth.” Article V, 1851 Treaty of Fort Laramie.

1864 – A battle with the Sioux, Cheyenne, and Arapaho who outnumbered Crow warriors ten to one, but the Crow were successful in turning the enemy party back. The location of this battle was near present day Pryor.

1865 – The Bozeman Trail was named after John Bozeman who used the trail as a shorter route to the Montana gold fields. Other miners and settlers followed. The trail cut through the Powder River country that was important hunting territory for many tribes, including bands of the Sioux nation. The Crow assisted the US military in protecting travelers on the trail. In 1868, the Sioux negotiated the closing of the trail.

It's a simple case of giving them 38 million acres and then saying we made a little a mistake. We're going to take 30 million acres back because we need it more.

They were people who never owed land and the thought of ownership was totally strange to them. To them, the land belonged to "First Maker" or who we call God. They didn't own what belongs to God, they merely used it as he had given it to them.

The White man came along, built fences, and said you can't be here. What gave these White men the authority over God's gifts? The Crow people traveled. They followed the bison and other herds. They planted corn where they camped in the summer. They lived a nomadic life.

By 1851, they were being told they had to stay in their territory. Then in 1870 they really were confined to the Reservation. And every few years, we took more land from them and paid them next to nothing for it.

The Crow actually cooperated with and worked with the US Army. Quite a few Crow learned our English and often acted as scouts. They were the one tribe that the government counted on to help whenever it needed it. Yet, by confining them to the reservation, it left them starving and lacking in firewood to keep them warm in the cold winters. The Crow actually did better than most of the tribes because of the cooperation between the government and the Crow leaders.

Coal was found on the reservation and the mining was contracted to a company. Compensation was a small percentage of the operations, and they wouldn't hire the Crow to work the mine. Today that coal mine still operates, many Crow do work the mine, and the income is vital to the tribe. But politics has often made a mess of things and company payouts have been questioned.

The other strange thing is that there are eleven tribes living on the Crow Reservation, although the Crow account for most of the population. The land initially granted contained a large portion of Wyoming. Today the reservation  is only in Montana. 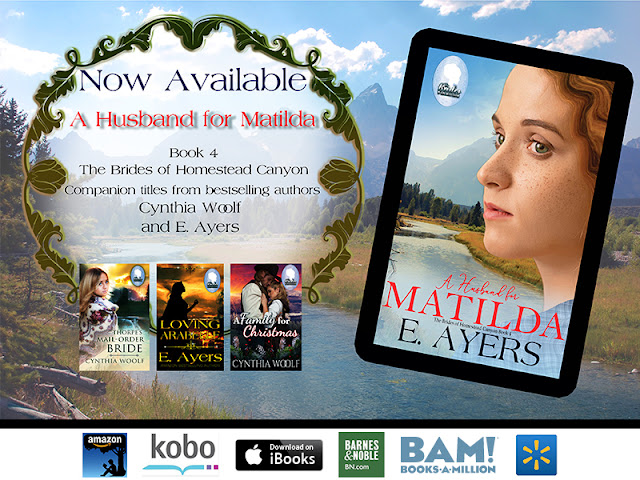 Matilda “Matt” Berwyn, forced to live disguised as a boy in a mining town, longs to escape and blossom into the female she's always wanted to be. But her desire to leave Homestead Canyon escalates when she realizes she's being stalked.

Stockyard hand Zeke Hillerman knows Matt's secret and has fallen in love with her. He helps her flee to his parents’ home in the east to learn to be a lady, while he struggles to start his own ranch. As Matilda grapples with Victorian expectations of young women, Zeke’s plans for their future unravel, and he realizes that the cost of her ticket out of Homestead Canyon may have been his own heart.