SURVEYORS OF THE WEST

It was the compass and chain
that won the west, not the six-shooter!

This quote by David Garcelon captured my attention while doing research for my Sweet Historical Western Romance, Her Believing Heart, book 1 in The Surveyor’s Daughters Series.

For years, I have been interested in the surveying process because of my husband’s family of engineers. His father was a highway engineer for the state of Idaho, and his grandfather was an engineer and surveyor who oversaw the construction of the courthouse, hospital, churches, and the flour mill, in a small southern Idaho community. Grandpa Budge’s 120-year old transit and tripod have stood in our living room for years. You can’t dust an antique piece of equipment like this without wondering about the everyday lives of those who used it.
Land surveying has always been an essential part of property development and land ownership in the settlement of the western states. Surveying makes it possible to have accurate maps and property lines using the complex elements of engineering, geometry, physics, and mathematics.

Stephen E. Ambrose, in his acclaimed book, Nothing Like It in the World: The Men Who Built the Transcontinental Railroad, 1863-1869, called pioneer surveyors the true “…mountain men, adventurous, capable of taking care of themselves, ready for whatever the wilderness threw at them…Nothing could be done until they had laid out and marked the line.”

The early surveyors required the skills of a woodsman to blaze trails, mineralogist skills to document the soil structure or important minerals, and marksmanship to obtain fresh food and defend against hostile Indians. Many surveyors lost their lives in skirmishes with the native tribes, as the tribes considered these European “measurers” the main cause for losing their land.

The mapping of the western territories was interrupted by the Civil War, but in 1867 four great surveys were put in motion: a geological survey of natural resources along the route of the railroad being built, a major survey of the western territories, a survey of the unknown canyonlands in the southwest, and a survey to create a military map of the southwestern area and to select sites for military posts. Clarence King (1842-1901), the first director of the U. S. Geological Survey, claimed that, “Eighteen sixty-seven marks . . . a turning point, when science ceased to be dragged in the dust of rapid exploration and took a commanding position in the professional work of the country.”

In the meantime, thousands of smaller surveys were taking place for mines, towns, roads, and canals as people moved westward. In Route Surveys, my father-in-law’s old college instruction book for prospective surveyors, Harry Rubey includes a list of clothing and personal supplies with which to provide members of a survey crew. In addition, he suggests the “Chief of Party” check availability of forage for animals, and housing and boarding of men. “If in farm houses, the spacing and capacity, if in tents, the number of tents necessary and the proper design to withstand storms, animals, and insects.
Further instructions by Mr. Rubey include, the assembling of each party at the close of the day’s work, so that no one may be lost or left alone in case of accident. Special instructions should be given in regard to passing through cultivated fields. “The engineer’s tact, good judgment, and ability to get along with property owners and other influential persons in the community will contribute largely to his progress, while neglect of this important function is apt to handicap him severely.”

One thing was for sure according to James R. Dorsey, a land, boundary, and title consultant. Without surveyors, “there would have been no migration west—at least nothing orderly.”
He says that without the orderly location of land by surveyors, range wars would have been worse than they were. No government land was sold, no towns or cities platted, no railroads, canals, irrigation channels, roads or mines were developed without surveyors going in first. 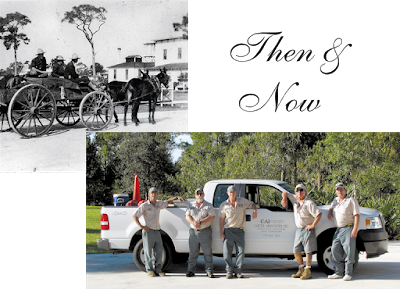 As the western territories developed into states, many surveys took years to complete. Others were of a shorter nature, allowing surveyors to work part-time like the father in my Surveyor’s Daughters Series. In this series, Mr. Gardner is a homesteader as well as a surveyor, and two of his eight daughters always go along to cook for the survey crew. Will one of his daughters want to tackle the rugged life of a surveyor when she grows up? That remains to be seen as the series progresses. 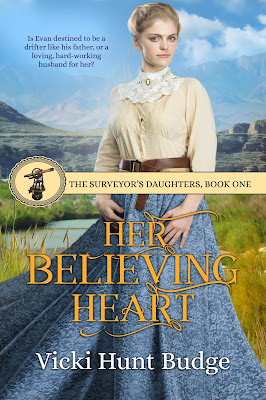 Link to Amazon: https://www.amazon.com/Believing-Heart-Surveyors-Daughters-Book-ebook/dp/B07VWDJNBL
Posted by Caroline Clemmons at 10/02/2019

Labels: HER BELIEVING HEART, Surveyors of the West, Sweethearts of the West blog, transit and tripod, Vicki Hunt Budge
Email ThisBlogThis!Share to TwitterShare to FacebookShare to Pinterest