The Ghosts of Galveston

I neglected to write a new post. So, I hope y’all will forgive me and enjoy this one a second time (assuming you enjoyed it the first time). It’s one of my favorites.

At only twenty-seven miles long and three miles across at the widest point, Galveston, Texas, is not a big place. Located about two miles offshore in the Gulf of Mexico an hour south of Houston, the barrier island and tourist Mecca is home to 48,000 year-round residents.

At least, that’s the number of residents the most recent U.S. Census counted. Those who call Galveston home know the population is much larger. A goodly number of the island’s dearly departed…well, never departed.

Built in 1859 by a wealthy hardware merchant, Ashton Villa is one of Galveston’s most striking museum houses. Miss Bettie Brown, the merchant’s eldest daughter, was quite the character during her lifetime. She never married, drove her own carriage, and smoked cigars in public, scandalizing the community. She lived to a ripe old age and died in 1920…but that doesn’t mean she left the property. Today, she reportedly scandalizes tour groups by appearing in the Gold Room and her private dayroom, roaming the grand staircase, locking and unlocking one of her lavish trunks, stopping clocks, and playing the piano.

Also called “the Mardi Gras ghost,” the spirit that inhabits Texas Declaration of Independence signatory Michel B. Menard’s 1838 mansion is thought to be that of his daughter Clara, who died in her teens. According to local lore, within the first few years after the house was built, it was the site of one of the first Mardi Gras balls in the country. During the festivities, Clara slipped on the staircase, fell, and broke her neck. Ever since, the hazy figure of a young woman dressed in party regalia of the era has been seen standing at the foot of the stairs during Mardi Gras season.

In 1920, twenty-five-year-old police officer Daniel Brister attempted to stop a robbery outside the 1877 Smith Brothers Hardware Store. He had just handcuffed one of the perpetrators when the second one shot him in the chest. Though bleeding, Brister chased down and cuffed the second robber, too…only to die of his wound moments later. Brister seems to have become less upstanding in the afterlife. These days, he pinches women’s posteriors and breathes down their necks in the restaurant now located at the spot of his death. He also throws pots and pans in the kitchen.

The pirate Jean Lafitte built the first permanent structure on the island. All that remains of the 1816 smuggler’s refuge Maison Rouge, originally painted red and surrounded by a moat, is a crumbling foundation. The U.S. Navy chased the privateer off the island in May 1821, but Lafitte reportedly loved Galveston so much, he returned in 1823…after he was killed during a sea battle off the coast of Honduras. Legend holds the pirate buried a treasure beneath three oaks on the western end of the island. Treasure hunters never have found the loot, but several have reported encountering Lafitte—right about the time he chokes them.

Because of its location overlooking the Gulf of Mexico, the 1911 Hotel Galvez once was a favorite getaway for Frank Sinatra and several U.S. Presidents. The most famous guest of the “Queen of the Gulf” never checked out of Room 501. According to generations of hotel staff members, the Lovelorn Lady awaited her fiancé in the room. When his ship went down off the coast of Florida and he was not listed among the survivors, she hanged herself. Sadly, the fiancé showed up about a week later. These days the Lovelorn lady doesn’t confine herself to Room 501, although that seems to be her favorite haunt. She has been seen or felt throughout the hotel, wandering the halls, breaking dishes, turning on water faucets, slamming doors, and blowing out candles.

After serving in the Confederate Army during the Civil War, Marcus Fulton Mott became a prominent lawyer. He built a grand Victorian Mansion in Galveston’s East End in 1884. Although the existence of a cistern on the property has never been confirmed, Mott’s son may have murdered three women and thrown their bodies into the well—or at least that’s what Mott’s ghost has told people. Reports of supernatural activity at the house have died down in the past two decades, but prior to the mid-1990s, the ghost at the Witwer-Mott House reportedly ordered people out of the home, threatened them, and threw mattresses across the room…while people were on them.

The original Point Boliver lighthouse, built in 1850, was pulled down during the Civil War so the Yankees couldn’t capture the light and use it as a navigational aid. The new lighthouse, built in 1872, still stands, though it was decommissioned in 1933 and sold to a private individual in 1947. No one has been inside the 116-foot-tall structure for years, yet people—including Patty Duke and Al Freeman Jr., who filmed a movie there in 1970—have reported seeing a figure on the light deck at the very top. Some say the ghost may be that of a lighthouse keeper’s son who killed his parents at the scene. Others believe Harry C. Claiborne, who began a twenty-four-year, two-hurricane tenure as lighthouse keeper in 1894, was so devoted to duty that he still mans his post.

Samuel May Williams served as Stephen F. Austin’s secretary, became the first banker in Texas, and founded the Texas Navy. The home he built on Galveston in 1838 is the oldest standing residence on the island. Known as “the most hated man in Texas,” Williams had a habit of pinching pennies and ruthlessly foreclosing on mortgages. Few are surprised he apparently hung around to terrorize the living. Fires have been lit in fireplaces when no one was in or near the home, there’s a “cold spot” outside the children’s rooms on the second floor, and a misty figure appears in the windows of the cupola atop the roof.

The Tremont House opened with great fanfare on April 19, 1839, in commemoration of the Battle of San Jacinto. By the 1860s, the Tremont had fallen on hard times—in more ways than one. In 1862, the Union Army commandeered the hotel to quarter soldiers. In 1865, the Tremont burned to the ground. Seven years later, the phoenix rose from the ashes even bigger and grander than before. The Tremont hosted guests including Buffalo Bill Cody, Clara Barton, Stephen Crane, and five U.S. Presidents, including Ulysses S. Grant. More hard times and several hurricanes later, the Tremont was demolished in the 1920s…only to be rebuilt once more in the 1980s. Somewhere along the line, a whole passel of ghosts moved in. A Confederate soldier marches up and down the lobby, where a little boy the staff calls Jimmy plays with bottles and glasses at the bar. Jimmy is thought to be the child who was run over in front of the hotel in the late 1880s. “Sam” was murdered on the fourth floor by a thief who wanted the haul Sam had made at one of the city’s storied casinos. The spirit in Room 219, assumed to be a disgruntled former employee, scatters the contents of guests’ luggage.

Among the many acts of bravery and selflessness recorded during the Great Storm of 1900, one stands out as especially poignant: That of a young schoolteacher who had taken refuge on the third floor of the Hutchings-Sealy and Company Bank on the Strand. As the seventeen-foot-storm surge submerged the island, sweeping property and lives from the face of the earth, the schoolteacher climbed through a window, perched on a ledge, and dragged people out of the flood and inside the building. She cared for the living for several days, until she succumbed to a fatal fever. To this day, no one knows her name, but she has a familiar face. Ever since the disaster, residents and visitors alike have seen a young woman dressed in the fashion of the day in various parts of the historic bank building. Before the restaurant that occupied the building for many years closed in 2008, some employees reported hearing her call their names.

(May disturb some readers.)
Of all the ghost stories on Galveston, William Watson’s may be the most gruesome. A bit of a daredevil, the thirty-two-year-old engineer was standing on the cowcatcher of a locomotive as it left the Santa Fe Union Train Station September 1, 1900—one week before the Great Storm destroyed the city. According to reports at the time of his death, Watson frequently pulled the stunt. Something went horribly wrong that day, though. He slipped from his perch, went under the train, and immediately was decapitated. His body stayed put; his head ended up one-quarter mile down the track, where the engine stopped. Watson reportedly haunts the former station (now the Galveston Railroad Museum), though not usually in visual form, thank goodness. Most of the time he merely makes strange noises and redecorates.

A second spirit hangs out at the museum, as well. For a time, part of the building served as a residential psychiatric treatment facility. In the 1980s, a female patient jumped to her death from a fourth-floor window. Since then, the gauzy form of a woman has been seen sitting on windowsills, one leg outside, before disappearing.


These are only a handful of the non-corporeal residents of Galveston. Sometimes called “a cemetery with a beach attached,” the island is second only to New Orleans in the number of reported hauntings. In addition to the celebrity ghosts, other spirits with unknown names and less spectacular stories remain on the island, partly because of Galveston’s dramatic history.

The island switched back and forth between Union and Confederate hands several times early in the Civil War (the Rebs finally managed to hang onto it from January 1863 on), and both sides left bodies behind in buildings along the Strand. After the Great Storm, the surviving buildings along the Strand became temporary hospitals and morgues. The Strand fell into disrepair for a number of years until Galveston philanthropist George Mitchell stepped in to renew and revitalize the area. During renovations, a number of skeletons were discovered in the walls, left there by war or storm victims who literally “slipped through the cracks,” evidently. That may explain why Galvestonians and visitors frequently notice vague forms in uniforms or period clothing floating near ceilings in some of the historic buildings.

Other reported hauntings include: 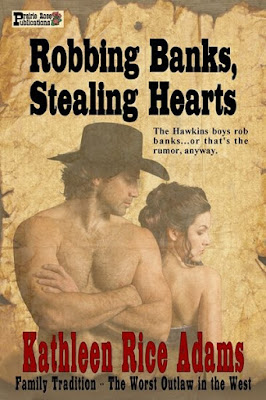 Though Galveston plays no role in “Family Tradition,” ghosts do. The story is one of two about bank-robbing brothers in Robbing Banks, Stealing Hearts.

Family Tradition
Haunted by his kin’s tradition of spectacular failure, bank robber Tombstone Hawkins is honor-bound to prove his family tree produced at least one bad apple. When carnival fortuneteller Pansy Gilchrist tries to help, she accidentally summons a pair of dishonest-to-goodness ghosts. Getting into the spirit of a crime is one thing…but how do you get the spirits out? 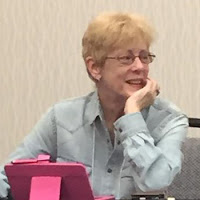