MOLLY GOODNIGHT, MOTHER OF THE PANHANDLE

THE DARLING OF THE PLAINS
By Carra Copelin

Mary Ann "Molly" Dyer Goodnight remains a positive role model for people, young and old. Her strength and spirit are qualities that have made Texas what it is today for Texans and the rest of the world.

Molly was born September 12, 1839, in Madison County, Tennessee to a prominent lawyer, Joel Henry and Susan Lynch Dyer. When Molly was fourteen, the family moved to Fort Belknap, Texas, where she worked as a schoolteacher and raised her five brothers after her parents died.

In the mid-1860s, she met Charles Goodnight and they married on July 26, 1870 in Kentucky. They settled in Pueblo, Colorado, where they worked their ranch until drought and the Panic of 1873 caused the family to move back to Texas. Irish investor, John George Adair backed Goodnight and the two men became partners, moving with their wives to the Palo Duro Canyon where they established the vast JA Ranch in May of 1877.

Molly became the surrogate mother and nurse to the cowboys of the area earning their respect for her compassion and natural remedies she developed for their wounds and fevers. She taught a number of them to read and mended their clothes and for this they nicknamed her "Mother of the Panhandle" or "Darling of the Plains".

She persevered as a ranch woman, teacher and healer. According to WOMEN IN TEXAS by Ann Fears Crawford and Crystal Sasse Ragsdale (Eakin Press, 1982), Molly’s home remedies included “coal-oil for lice, prickly pear for wounds, salt and buffalo tallow for piles, mud for inflammation and fever and buffalo meat broth for a general tonic."

In 1898, Molly and Charles helped establish Goodnight College through the donation of 340 acres. Molly passed away in April 1926. Her gravestone is inscribed with a fitting tribute: "Mary Ann Dyer Goodnight, One who spent her whole life in the service of others." 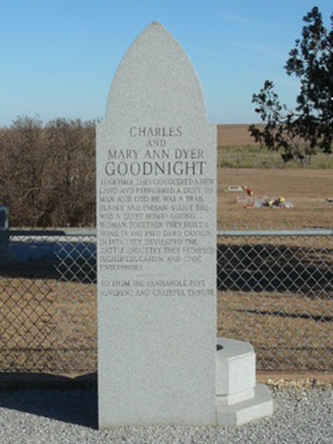 Today, visitors can catch a glimpse of Molly Goodnight's life in various exhibits at the Armstrong County Museum in Claude, Texas. The museum is also working to restore the Goodnight Home, which is on the National Register of Historic Places. To learn more, visit: http://armstrongcountymuseum.com .

I chose Molly Goodnight because she is the epitome of Texas history and its people and she embodies the spirit of the characters I write about. I'm so glad to be a part of Women's History Month and Sweethearts of the West.

Award winning author Carra Copelin writes contemporary and historical romance. Her current project is The Texas Code series of romantic suspense novels to include CODE OF HONOR, CODE OF CONSCIENCE, CODE OF JUSTICE, CODE OF LAW, and the historical KATIE AND THE IRISH TEXAN, and MATELYN AND THE TEXAS RANGER.


Visit Carra at these sites: